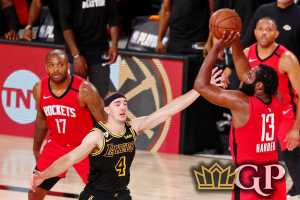 The Lakers and Rockets play Game 3 of their playoff series on Tuesday on TNT. With the series tied 1-1, Game 3 represents the first turning point of the series. The Lakers are once again installed as 5.5-point favorites with the total clocking in at 224.

The Los Angeles Lakers looked to be a completely different team when it took to the hardwood to battle James Harden and the Houston Rockets in Game 2 of the Western Conference Semifinals on Sunday night. After getting roasted mostly due to the offense coming out rusty and being unable to hit water while standing in a boat in the ocean, LeBron James and Anthony Davis took it upon themselves to put the team on their collective back and lead the team to victory. It also helped that others stepped up in the scoring department as well. Unfortunately for the Rockets, Russell Westbrook was a no-show in Game 2. Now that each team has earned a win to this point of the series, Game 3 represents the first turning point of the series. The Lakers are once again installed 5.5-point favorites with the total clocking in at 224. Both teams have a win and cover with the O/U splitting through the first two games.

Los Angeles had enough in Game 2. Entering the pivotal bout down 1-0 in the series, the squad went all-out and finally put an end to a three game SU and ATS losing streak to the Rockets. Sunday night’s 117 point outburst was the most points the Lakers had scored against the Rockets since taking them down back on January 18 by a 124-115 final count as 3.5-point Toyota Center underdogs. In doing so, the combined 226 points put an end to a three-game under streak that just so happened to coincide with Houston’s three straight wins and covers. As it stands, Houston holds the 3-2 SU and ATS advantage in the rival’s five 2020 skirmishes with the under cashing in three of those matchups; an average of 223.2 points hit the board.

No way around it, LA was absolutely brutal in the opening game of this series. It’s highly likely a six-game lay-off played a major role as to why. However, LA already showed that it will get its salad tossed by the Rockets if nobody else besides James and Davis steps up. The duo combined for 45 points and 22 rebounds in the series opener, but it had no shot with only two other players tallying double-digits in scoring with Danny Green and Alex Caruso combing for 24 points. But on Sunday night, the Lakers put forth a much better balanced attack. Sure, LBJ and “The Brow” led the charge with 62 combined points, 21 combined rebounds and 13 combined assists, but the offense also got significant contributions from Markieff Morris (16), Kyle Kuzma (13), Rajon Rondo (10) and Green (9). A collaborative effort will once again be needed on Tuesday night for the Lakers to take their first series lead.

In Game 1, the Rockets were able to steal the series lead by burying 48 percent of shots taken mostly due to the effort of Harden who went on to drain 12-of-20 shots to log a game-high 36 points; he also knocked down half of his six attempted 3-point shots. Only four other players registered double-digits in scoring with Russell Westbrook going for 24, Eric Gordon scoring 23 and Austin Rivers chipping in with 10. Most importantly, the team was able to play even with the Lakers on the glass (41-41). Though the team shot 45 percent in Game 2 and had six total players go for double-digits on the stat sheet, the Rockets were never truly in the game regardless of it coming out like gangbusters ultimately taking a brief lead after trailing by 16 at the break. Houston now knows that the Lakers have it in them to come out the victor even if it puts forth a better than average effort offensively. They lost the battle of the boards and allowed LA to accrue a total of 30 assists. This series will get out of hand quickly if that’s allowed to continue.

Is it just me or has Russell Westbrook been invisible through the first two games? He scored the quietest 24 points of his career in the series opener, and then followed it up with a stinker only scoring 10 points on 4-of-15 shooting while committing seven turnovers. That can’t happen again the remainder of this series if Houston is to get back to the Western Conference Finals following a two-year hiatus. Russ is the beta to Harden the alpha. He must rediscover his scoring touch and quit complaining about fouls not being called every time he touches the ball. With that, I’m expecting a much better showing for the All-Star in Game 3. The Lakers were simply unconscious on Sunday night. The team seemingly couldn’t miss a shot. That however hasn’t been the case throughout the team’s stay in Orlando, and I’m pretty sold on it being a fluke. I called for the Rockets to win this series in six games, and I’m still sticking by that prognostication. Houston’s small ball ways will sooner or later mess with LA’s conditioning. It’s only a matter of time before James and Davis are exhausted shouldering the load. It might not be in Game 3, but I’m going to bet like it will be the start and hit the Rockets plus the points as well as on the moneyline.