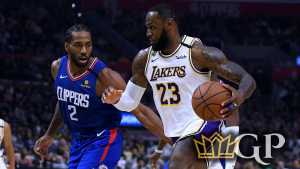 The 2020-21 NBA season gets underway on Tuesday night with two games on TNT including the Los Angeles Clippers visiting the Los Angeles Lakers. It is a high-profile matchup, as the Clippers feature Kawhi Leonard and Paul George, while the Lakers have LeBron James and Anthony Davis. The defending NBA champion Lakers are listed as a 2-point favorite in what is really a neutral site game at Staples Center with no fans in attendance. Let’s look at this matchup for Tuesday and NBA picks.

This game has start time of 10 p.m. Eastern on Tuesday night on TNT. The Lakers are listed as just a 2-point favorite and that tells you just how much respect the Clippers are getting from the oddsmakers. It could be because the Clippers will have their duo of Kawhi Leonard and Paul George on the court together. The duo didn’t play together for almost two months at the beginning of last season due to injuries. The Clippers have a new head coach in Tyronn Lue and a different feel entering this season.

“Obviously it’s a lot different this year,” Leonard said to the media, “Last year we built continuity us going through the season, going through ups and downs. This year we’re playing in the first preseason game. We didn’t play last year in the first preseason game, either of us. We didn’t practice the first practice. So all that is buying into a better culture and us just being present, seeing us focus in that first practice or in these games, it just trickles down and these guys know it’s no playing around.”

Lue has said that developing a good team chemistry this season is critical to their success. Lue wants all of his players to know their roles and his lineups will have continuity. Defense will be a big key for the Clippers and Lue is stressing that Leonard and George have to set the tone. “I think Kawhi and PG every night have to set the tone for us defensively along with Pat Beverley.” Lue said to the media.

The Lakers are a tough team to stop with James and Davis and those two were so good a year ago that the Lakers won their 17th NBA title.  The Lakers look different than they did a year ago, as they have a different supporting cast for their two superstars. The newcomers are Montrezl Harrell, Dennis Schroder, Marc Gasol and Wesley Matthews.

The odds on this game definitely tell us something as the Clippers are just a 2-point underdog. That is a lot of respect for a team going up against the defending NBA champs. I definitely want to be on the same side as the oddsmakers, and in this game they are begging people to bet the Lakers. The NBA is not nearly as much a public sport as the NFL is, but this game should get some attention from the public since it is a TNT game and on opening night and the public is going to bet the Lakers, especially with the number being short. I will go against the public and take the Clippers plus the points. I also expect the public to bet the game over the total because that is what the public does in TV games. The under has been a good bet in this series of late, so I will also take the game to go under the total.