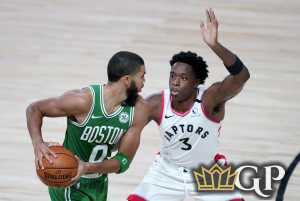 Must-see NBA betting T.V. is set to go down in the bubble on Thursday night when the Atlantic Division rival Boston Celtics and Toronto Raptors square off in Game 1 of their Eastern Conference semifinals matchup. Let's look at Celtics vs. Raptors picks.

Must-see NBA betting T.V. is set to go down in the bubble on Thursday night when the Atlantic Division rival Boston Celtics and Toronto Raptors square off in Game 1 of their Eastern Conference semifinals matchup. Both squads have been very impressive since the NBA restarted at the end of July. Brad Stevens’ squad went 5-3 SU and 3-4-1 ATS in its eight played seeding games, while the defending champion Dinos won all but one of their eight played games and covered the closing NBA odds in six of them. Each then went on to bust out the brooms in the opening round of the playoffs with the Celtics toying with the Philadelphia 76ers and the Raptors getting the job done against the overmatched Brooklyn Nets. Toronto initially opened up as -120 chalk to win this series, but the betting public has bumped it up to as high as -150 in some places. As for Game 1, the Raptors opened -1 but have since been bumped up to 2-point favorites with 54 percent of the handle coming in support of the defending champs.

Boston came out the victor in three of the division rival’s four regular season skirmishes. It also logged the decided 122-100 outright win and cover as 1.5-point underdogs when the teams collided in the bubble back on August 7. That matchup was a real eye opener for those betting the game as well as those hunting for value on the NBA title futures odds. There might not have been a team in the league that could’ve contested the C’s in that one after the team shot nearly 50 percent from the field and forced 17 Toronto turnovers to cruise to the 22-point triumph. Jaylen Brown’s 20 points led the way, but six other players registered double-digits in scoring against one of the league’s best overall defenses. It was a testament to just how locked in the team currently is! But were the Dinos sandbagging it? That’s certainly something to take into account when deciding on which side to back in the series opener.

Jayson Tatum has proven to be far and away the best player selected in the 2017 NBA Draft. While Donovan Mitchell and Bam Adebayo have proven to not be slouches and were also taken later in the first round, it’s Tatum that looks to be coming into his own as one of the league’s best young players. The former Duke Blue Devil has taken his game to the next level since the restart. He was electric in the seeding games, but was even better in the first round against the Sixers whom he gouged for an average of 27 points and a tick under 10 rebounds per game. Toronto is currently void of that lone alpha that can lead the team to the Promised Land much like Kawhi Leonard did last season. Boston’s alpha is currently running wild and will be tough to handle over the course of this series.

The Dinos possess the depth advantage in a big way this series. It’s got six players averaging double-digits in scoring, and both Pascal Siakam and Fred VanVleet have proven to be a lethal duo in the postseason combining for 42.1 points per game in the playoffs. Even bench players like OG Anunoby and Mark Gasol know how to fill the hoop with basketballs. However, one of the key components that helps bring it all together is hobbled with Kyle Lowry suffering a nasty ankle sprain in Game 4 versus the Nets. While Boston will be without the services of Gordon Hayward who suffered an even worse ankle sprain, his presence on the court isn’t as crucial for Boston to succeed. The same can’t be said for Toronto who rely upon Lowry’s scoring and ability to get other teammates involved.

There are so many unknowns to take into account as this pivotal series enters Game 1 on Thursday night. Was the Celtics 22-point romp a sign of things to come? Just how much will they miss Hayward’s presence? Is Lowry’s ankle something to really worry about if you’re a Raptors fan? I personally will be taking a wait and see approach in this game. I’m interested to see how Boston’s defense attacks the Raptors knowing full well one of its best ball distributors won’t be playing at 100 percent; if at all. I also want to see how Boston is able to deal with Toronto’s size close to the basket with its only main big men being Enes Kanter and Daniel Theis. Regardless, I lean towards the Celtics to win this series and would back them in the series opener with Toronto not likely as fluid offensively with Lowry unable to go full throttle. Take the bucket and look for the series opener to be of the lower scoring variety as well.