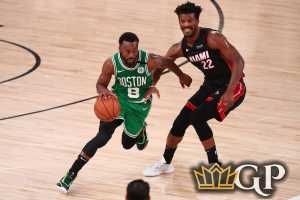 The Boston Celtics will look to even up the Eastern Conference Finals as they take on the Miami Heat on Wednesday night on ESPN. Let's look at the game and NBA Playoff Picks.

Staring at an 0-2 deficit right in the eye and simply having no answers for the Miami Heat through the first two games of the Eastern Conference Finals, the Boston Celtics exhibited a ton of moxie and perseverance to get right back in the series by taking Game 3 in a decisive fashion. In doing so, Brad Stevens’ troops put an end to their 0-3 SU and ATS streaks against the Heat in the bubble. Linemakers had them installed 3-point favorites before being bet up to get back in the series, and that’s once again the case for Game 4 with Boston hitting the board as 2.5-point favorites and the total lined at 210.5. Miami is yet to drop two straight games in the playoffs, and bounced back from its only other loss by closing the Milwaukee Bucks out in Game 5.

The total hasn’t moved an inch at online sportsbooks since opening to the public, but the betting markets once again look to be enamored with Jayson Tatum and company who currently check in as 3-point favorites with 75 percent of the early betting handle expecting Boston to even up the series. The Celtics have gone off the board favored in all three playoff tilts as well as five of the six overall 2019-20 meetings. The total has alternated overs and unders through the first three games with the last bout playing for a high scorer after the teams combined for 223 points; the total closed at 208.5 and is currently the highest of the series at 210.5 with 77 percent of the tickets booked in support of the teams playing to successive high scorers.

The C’s big three were nothing short of spectacular in Game 3 combining for 72 points, 15 assists and 27 rebounds to all lend a hand in the 11 point triumph as 3.5-point favorites. Jaylen Brown led the way with a team-high 26 points on 11-of-17 shooting from the floor. He also proved to be a pest for Miami ball handlers in logging three steals. As a team, Boston shot the lights out converting on 48 percent of its shots from the field, and made the Heat pay for sending them to the charity stripe 30 times by knocking down 26 of their attempted freebies. The game also marked the return of Gordon Hayward. Though he only converted 2-of-7 shots into six points, he contributed in numerous other key areas to lend a hand in Boston getting back in the series. Boston certainly looked to have a different swagger to themselves at the conclusion of Game 3.

Miami converted at 44 and 47 percent clips in the first two games of the series. Unfortunately, Erik Spoelstra’s offense went ice cold in Game 3 shooting 39 percent as a team which included an ugly 12-of-44 showing from downtown (27%). While Duncan Robinson continued his hot shooting from beyond the arc (4/8), Tyler Herro, Goran Dragic and Jae Crowder stunk the joint up combining for a 7-for-27 success rate. Bam Adebayo and Jimmy Butler were the only efficient scorers for the Heat with the former draining 10-of-14 shots for a game-high 27 points and the latter converting on 6-of-13 for 17 points. While Miami did have six players tally double-digit scorers, it wasn’t enough to combat Boston’s fearsome foursome. Losing the rebounding battle 50-42 didn’t help their cause either.

All three games of this series have played out similarly. Boston got out big initially only to see Miami make a run to get back in the game. In games 1 and 2, the Celtics were unable to hold onto the lead. However, Game 3 saw them flip the script and see it all the way through. Its ability to do so was predicated upon the game’s overall pace of play in which Boston pushed to the limit every chance it got. As dominant Miami has looked throughout the postseason, it just might finally be up against it. We were all witness to Boston returning to its comfort zone with Hayward back on the hardwood which allowed it to revert back to a more desired small ball lineup with regularity; it gave the Heat fits! With Boston routinely taking the hoop to the rack for more efficient shots and the Heat still relying upon excellent 3-point shooting, I’m starting to buy into the idea of Boston making a run to win this series and advance. I recommend laying the points in Game 4 while also throwing some beer money on Boston to win this series at a short plus money return.