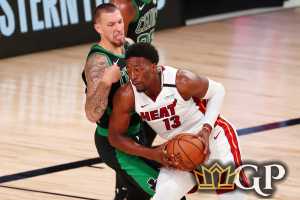 Just like it did in the prior two games of this series, Boston opened up as favorites to win Game 3. Let's look at what is virtually a must-win game for Boston and Celtics vs. Heat Picks.

You can’t help but think the Boston Celtics are already a defeated bunch staring at an 0-2 deficit entering Game 3 of the Eastern Conference Finals. Already through two games played, Brad Stevens' squad had secured early double-digit leads in each only to see the Heat battle back and win each game; one in overtime and the other in regulation. As the infamous character Teddy KGB from the movie Rounders would say, “This team has got alligator blood.” Seriously, I’ve never seen an underdog make an emphatic run quite like the one Erik Spoelstra’s troops are currently on. Believe it or not, but Miami stands 10-1 SU and against the NBA odds in the playoffs yet online sportsbooks have them installed 3-point underdogs to win Game 3 on Saturday night!

Just like it did in the prior two games of this series, Boston opened up as favorites to win Game 3. After going off the board at -2 in Game 1 and -3 in Game 2, the Celtics hit the board as 2.5-point favorites to cut the Heat’s series lead in half. Not so surprisingly, the Celtics were immediately bet up to -3 even though 58 percent of the early handle has come in on the Heat to take a 3-0 series lead. It’s still a bit early to know if the early action was sharp or not. If not for an extra session in the series opener, the under would be 2-0 in this series. The total for Game 3 has however been bet up a half-point from the 206 opener with a whopping 83 percent of the handle already booked in support of the line move. Very interesting considering the teams have combined for low scorers at as 3-1-1 clip in their five overall confrontations this season.

The C’s big three did everything it could to pull out the win on Thursday night, but it just wasn’t meant to be. Jayson Tatum and Jaylen Brown went for 21 points apiece, while Kemba Walker led the team in scoring with 25 points on 9-of-19 shooting from the field. Unfortunately, Marcus Smart was the only other player to register double-digits which ultimately prevented the Celtics from matching Miami’s balanced scoring output. Boston knocked down 50 percent of its shots and outboarded the Heat by three yet still came up short on the scoreboard. The main contributing factor that allowed for the Heat to battle back from a 13-point halftime deficit and pull out the win was 20 Boston turnovers. Miami only turned it over nine times!

How huge has Goran Dragic been throughout the first two games of this series? Actually, you can spin it all the way back to the seeding games. The Heat’s primary ball handler went for 29 points on 11-of-19 shooting in the series opener, and then followed it up with a team-high 25 points and converted 53 percent of his shots which included a 3-of-7 showing from downtown. He was one of six players to register double-digits in scoring with Duncan Robinson lighting it up from beyond the arc (6/12) and Bam Adebayo the leading rebounder with 10 to go along with playing even more stifling defense. As a team, Miami has only turned the rock over 21 total times with the nine miscues the main reason why it was able to outlast Boston’s white-hot shooting on Thursday night.

No team looks more locked in right now in the bubble than the Miami Heat. Its run to this point has more or less gotten preposterous. After initially opening up the underdog on the series odds versus the Celtics, Miami is now the decided -360 chalk and sits only behind the Lakers on the current NBA championship odds. The Pacers and Bucks simply had no answers on how to compete with Jimmy Butler and company in the first two rounds, and it’s now clear as day that Boston likely won’t figure it out either. If ever there was a spot to fade the Heat, Game 3 is likely it. However, they just have the look of a team of destiny so I have no inclination whatsoever to get in the way of their money train right now. Forget the points, hit the Heat on the money line and be on the side of the sportsbooks who’ve already been inundated with Celtics money since the Game 3 betting lines hit the board.