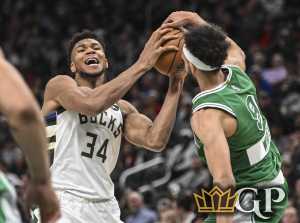 The Milwaukee Bucks take on the Boston Celtics in the Eastern Conference semifinals. The Celtics have the home court advantage and they are listed as a 2-1 favorite to win the series. Let’s look at the series between the Bucks and Celtics.

The Milwaukee Bucks take on the Boston Celtics in the Eastern Conference semifinals. The Celtics have the home court advantage and they are listed as a 2-1 favorite to win the series. The Bucks are coming off a series win against Chicago, while the Celtics took out Brooklyn. Milwaukee is the defending NBA champion and they have superstar Giannis Antetokounmpo but the Bucks will be without Khris Middleton for this series, as he is out due to an MCL sprain. The best-of-seven game series between the Bucks and Celtics begins on Sunday, May 1 with Game 1 in Boston. The Celtics are listed as a 4.5-point favorite in Game 1. Let’s look at the series between the Bucks and Celtics, series odds and series schedule.

The Celtics are listed as a -200 favorite to win the best-of-seven series at BookMaker.eu. Boston is a 4.5-point favorite in Game 1 with the total listed at 218.5

The Celtics were the best team in the NBA over the last three months and they would have been favored in this series against the Bucks even if Middleton was playing, but with Middleton out, Boston is a 2-1 favorite in NBA odds. It will be extremely difficult for Milwaukee without Middleton. The Bucks were not a good defensive team with Middleton and without him they are really going to struggle. The Bucks gave up over 112 points per game this season, 19th in the league. Middleton is one of their best defenders and they simply can’t make up for his absence. Perhaps Bobby Portis can make up for some of the offense, but he is not the defender that Middleton is.

Boston was the best defensive team in the NBA during the regular season and they showed in the series against Brooklyn that they can stop superstar players, as they contained Kevin Durant and Kyrie Irving. They will have a tougher time with Giannis, but it definitely helps Boston’s cause that they won’t have to worry about Middleton. The Celtics have Robert Williams back from injury and he will be a major player in this series with his defense on Giannis.

The only way that Milwaukee can make this into a series is if Giannis plays at an all-world level. He may need to average 40 points per game for the Bucks to have a chance in this series. The Bucks don’t play good enough defense to shut down the Celtics, so their only chance is to turn this into a track meet and hope they can outscore the Celtics.  If Milwaukee chooses to make this into a high scoring series, then they will have to make sure that they don’t wear out Giannis on defense. Middleton normally would have been guarding Jayson Tatum, but now the Bucks might be tempted to put Giannis on Tatum. That would probably be a mistake because Milwaukee needs Giannis to score more than they need him to play defense.

This should be a high scoring series so you may want to play Game 1 to go over the total and then monitor how much the oddsmakers move the total. The Celtics are also worth a play in this series, both in the individual games and in the series. Boston is far better on defense than Milwaukee and without Middleton, the Bucks are not as good as Boston on offense. The Celtics actually had the top-ranked offense in the NBA in their last 32 games. This looks to be a series that Boston should win and one in which is high scoring.