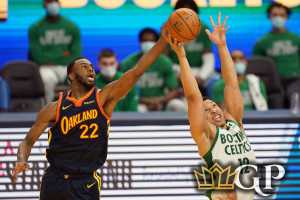 The 2022 NBA Finals is a matchup between the Boston Celtics and Golden State Warriors. Both teams have strong pedigrees, as the Celtics are a marquee franchise with a rich history, while the Warriors have been one of the top teams in the NBA over the last decade. Boston features Jayson Tatum and a team that plays strong defense, while the Warriors feature Stephen Curry and Klay Thompson. The Warriors will have the home court advantage in the best-of-seven game series and they are listed as the favorite to win the series. Let’s look at NBA Finals odds and NBA Finals picks and also look at NBA Finals MVP odds.

The Warriors are listed as the favorites to win this series, but Boston is getting a lot of respect from the oddsmakers. The Celtics had a lot more trouble reaching the NBA Finals than did the Warriors. Boston had to win two game 7’s just to get this far, while Golden State didn’t have nearly as much trouble. Boston plays very good defense, but surprisingly, so does Golden State. The Celtics were first in the league in fewest points allowed this season, while the Warriors were third.

If you look at the overall numbers then the offense for each team seems even, but it should be noted that Golden State didn’t have their starters in the lineup for much of the season. When everyone is healthy, the Warriors have far more offensive options than Boston has. The Warriors have a lot more experience in big games, as they will be making their sixth NBA Finals appearance in the last eight years. The Warriors have a strong supporting cast surrounding Curry, Thompson and Draymond Green, as Jordan Poole and Andrew Wiggins have been excellent this season. Boston has a decent supporting cast surrounding Tatum, but while Jaylen Brown and Marcus Smart are good defenders, neither is considered a great offensive player.

The MVP Odds favor Curry and it is hard to make a case for any other player winning the award for Golden State. If the Warriors win the series, then Curry is likely to lead the way. If Boston wins the series, then Tatum is the obvious choice. There doesn’t seem to be much value in taking any of the longshots.

I am surprised that the price on this series is not higher. Boston is a good team and they play good defense, but Golden State looks to be on another level. When the Warriors are rolling they are really tough to stop. Curry is the best player on the floor, but he gets a lot of help, as Thompson is capable of getting hot and Green always seems to play well. You also have to like the way that Wiggins and Looney are playing and did you know that Poole is averaging 16.4 points off the bench?

Boston has some nice depth, but they simply don’t possess the same firepower as Golden State. For the Celtics to win this series they have to play great defense and while Boston can hold down one or two players, they have to stop multiple Golden State players who can score effectively.

It is also worth noting that Golden State excels in the clutch. They have a plus-94 differential in the fourth quarter during this year’s playoffs. Boston doesn’t have nearly the rating in the clutch that the Warriors have. When all is said and done the Warriors will find a way to make the big plays when the game is on the line and win this series.