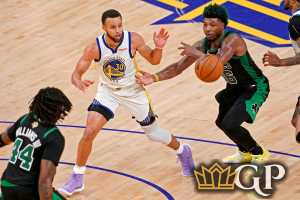 The Golden State Warriors are one win away from winning their fourth NBA title in the last eight seasons. They take a 3-2 series lead into Boston on Thursday night as they look to close out the Celtics in Game 6. Let’s look at NBA Finals Game 6 picks.

The Golden State Warriors are one win away from winning their fourth NBA title in the last eight seasons. They take a 3-2 series lead into Boston on Thursday night as they look to close out the Celtics in Game 6. The Celtics suffered their first back-to-back losses of the 2022 NBA Playoffs and now they are on the brink of elimination. The Celtics blew a golden chance to take the series lead in Game 5, as Stephen Curry had an off night, but a slow start and turnovers doomed the Celtics chances. Golden State is now a -360 favorite to win the series, but the Warriors are underdogs to win Game 6. Let’s look at NBA Finals Game 6 picks.

It was thought before this season that Boston’s defense would suffocate the Warriors and give the Celtics a good chance to win the series. While Boston’s defense has been good, Golden State’s defense has been better. In each of their three losses, the Celtics have scored less than 100 points. The Celtics got 27 points from Jayson Tatum in Game 5, but he has struggled for much of the series. Tatum needs to play well and his teammates need to stop turning the ball over.

Golden State wants to close this series out on Thursday night and head coach Steve Kerr said to the team that they are going to finish the series in Boston.  Whether the Celtics can use that as motivation is questionable, but it is an interesting talking point. What will help the Celtics is playing at home where they shouldn’t turn the ball over as frequently.  Boston has also played well with their backs to the wall, as they rallied to beat the Bucks after trailing 3-2 in that series and they beat the Heat in Game 7 of the Eastern Conference Finals.

The interesting thing to me about this series is that we have yet to see a close game. The series is close in terms of games with the Warriors leading 3-2, but none of the individual games have been very good. I think we are overdue for a game that goes down to the wire so I think the Warriors plus the points are worth taking in Game 6.

I also think the total is worth playing. Oddsmakers may have overreacted to the total in Game 6. They have been getting stomped with bettors taking the under, so they made the total 210 for Game 6. That is a four point drop from where the total started in this series. I know that Golden State and Boston are good on defense, but I expect Curry to have a much better shooting night in Game 6 and Boston knows they need to step up their offense if they are to win this series.  I’ll go over the total in Game 6.