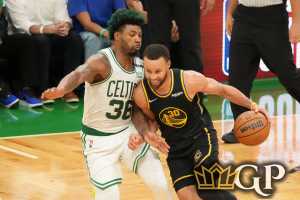 The Boston Celtics will look to take a commanding lead, as they host the Golden State Warriors in Game 4 of the NBA Finals on Friday night on ABC. Let’s look at NBA Finals Game 4 picks.

The Boston Celtics will look to take a commanding lead, as they host the Golden State Warriors in Game 4 of the NBA Finals on Friday night on ABC. The Celtics dominated the fourth quarter of Game 3 on Wednesday night and won by a score of 116-100 to take a 2-1 lead in the 2022 NBA Finals. The Celtics are listed as a 4-point favorite on Friday night with a total of 214. Online sportsbooks have put up an adjusted series price and Boston is now a -240 favorited to win the best-of-seven game series. There is no question that Game 4 is a pivotal game in this series, as the Warriors can even the series with a win, while the Celtics can take a 3-1 lead with a victory. Let’s look at NBA Finals Game 4 picks.

The Warriors have a lot to improve upon with very little time to do it. They also have to worry about an injury to Stephen Curry that he suffered late in Game 3. The Warriors have gotten excellent play from Curry and if he is less than 100%, they are in serious trouble in the rest of this series. Curry said he expects to play in Game 4. "Obviously, in some pain, but I'll be all right," Curry said to the media after Game 3. "We'll see how it responds. Not much other to say. I don't feel like I'll miss a game. Take advantage of these next 48 hours to get ready."

Curry has been the best player for the Warriors. He scored 31 points in Game 3 and he finally got some help from Klay Thompson who has 25 points.  Unfortunately for the Warriors, Draymond Green did next to nothing. Golden State also didn’t get much from Jordan Poole who had just 10 points.

The Celtics have played very good defense in this series and they are making Curry work for everything. If Curry is not at full strength, it is hard to see Golden State winning this series. Even if Curry is playing great, the Warriors are still struggling to win games. Boston is destroying the Warriors on the boards and they are dominating the game in the paint.

Golden State is not the same team that won three titles in five NBA Finals appearances. This year’s team doesn’t have the confidence that the title team had. They are not getting enough secondary scoring to support Curry and they have not shown much toughness. Golden State is also not a good road team. Boston has shown they can push the Warriors around and if they could just solve their third quarter problems this series would be over. Boston has not been a great home team against the spread this season, but this number on Friday is short. None of the games in this series has been close, so if you like the Warriors you may be better off taking the money line. I don’t know that Curry can single-handedly carry the Warriors to a win, especially when he is hurt. I’ll go with the Celtics to win Game 4 and also play the game under the total.