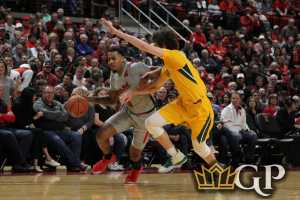 I’ve been complaining about juicing out at online sportsbooks with my Big Monday ESPN college basketball picks for what feels like months now. I wish I had the opportunity to do so once again after taking the collar for the first time all season. The Louisville Cardinals are now dead to me after more or less dominating the first half of the revenge bout with FSU only to go into the tank real quick in the second half to ultimately get thumped. Oklahoma State had no shot of competing in the night cap with a Kansas Jayhawks team I thought would suffer a huge letdown after coming up with a big win in Waco to snap Baylor’s record-breaking Big 12 win streak. I haven’t swept a Big Monday board in what feels like decades, so let’s go out with a bang and cash some tickets!

The Dookies have suffered some eye-opening defeats over the last couple of weeks; one of which just occurred in Winston-Salem where Coach K’s kids dropped a surprising 113-101 decision to Wake Forest in overtime. But before that, the Blue Devils got lambasted in Raleigh where the Wolf Pack dominated from the opening tip until the clock read double zeroes to log the 88-66 win and cover as decided 6.5-point home underdogs. The loss was Duke’s third in the last four meetings with the Wolf Pack, and it moved them to a bankroll killing 0-6 ATS in the last six and 2-8 ATS in the last 10 overall meetings. Duke has failed to cover at home against NCST four straight times! That said, the Blue Devils have nearly been automatic in the comforts of Cameron Indoor Stadium where they’ve won 13 of 15 games and went on to cover the closing college basketball odds nine times. The last two times they took the hardwood in front of the “Crazies” Duke smeared both Virginia Tech and Notre Dame by an average of 28 points per game. Like Duke, North Carolina State has been much better at home (12-4) than on the road (5-6). I fully expect the home team to get some retribution even with the Tar Heels up next on the docket.

I begrudgingly laid the home chalk with the Red Raiders when they hosted Baylor way back at the beginning of January. Keep in mind, this was before Scott Drew’s squad let it be known that they were a bona fide national title contender. I sat and watched in amazement as the Bears dominated last year’s championship game entrant en route to logging the outright 57-52 upset win as 3.5-point underdogs. I was able to recoup some money lost on the full game wager by betting Baylor for the 2H, but that’s a story for another day. However, Baylor went on to turn the ball over 18 times in that game and was still dreadful from long range. What propelled it to the win and cover was the way in which it went about its business on the glass outboarding the Red Raiders 40-24. Freddie Gillespie and Mark Vital played prominent roles in allowing them to own the battle of the boards with a combined 23 rebounds. I don’t foresee TT conceding 14 offensive rebounds this time around! With Tech just getting lambasted in Norman by the Sooners and not being very good away from Lubbock all season, linemakers are sure to post an inflated impost for this rematch. When that occurs, I’ll be looking to take as many points possible in what should be another rock fest making points tough to come by.