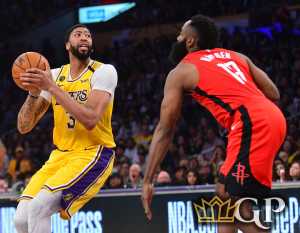 The Los Angeles Lakers take on the Houston Rockets on Thursday on TNT. With the No. 1 seed in the West now locked up, it remains to be seen just how focused the Lakers are with having absolutely nothing to play for. Let's look at NBA picks.

Though Anthony Davis’s and-1 shot from beyond the arc didn’t do much to allow the Los Angeles Lakers to lock down the top seed in the Western Conference on Monday night, it did put NBA bettors that laid the points with the Lake Show at online sportsbooks in a position to cash a ticket against the Jazz in the closing minutes. With the No. 1 seed in the West now locked up, it remains to be seen just how focused the Lakers are moving forward with it having absolutely nothing to play for. Also throwing their hat in the ring as a bona fide Western Conference title contender is the Houston Rockets who’ve done nothing but impress since things picked back up in in the bubble. Fresh off an exhilarating comeback win over the Milwaukee Bucks and needing this game much more for playoff positioning purposes, backing James Harden and his mates to possibly win a fourth straight just might be the prudent move to make when these teams collide under the bright lights of TNT’s Thursday night telecast.

It hasn’t been pretty for the Lakers since the league picked back last week. LeBron James and his mates did log a win over the Clippers to open up the festivities, but failed to cover the 4-point spread in the 103-101 triumph. Then they got curb stomped by the Toronto Raptors 107-92 as short 2.5-point neutral court favorites. Monday night’s tilt against Utah saw the game tied midway through the third before going on a run to take control of the game. Still, the pointspread victor went undecided into the game’s closing moments. Most concerning were all the wide-open threes Utah was able to shoot. Though it only drained 12-of-43 attempts, a bulk of the looks were wide open. Allow those many uncontested shots against the Rockets and they’ll shoot you right out of the gym!

While the Raptors and Pacers have impressed, neither holds a candle to the Rockets at this point. Houston’s offense has been nothing short of electric in a pair of wins over Dallas and Milwaukee. It dropped 153 points on the Mavericks in an epic 153-149 overtime triumph, and then followed it up by battling back late in the fourth quarter to steal a 120-116 outright win over arguably the league’s best team in the Bucks. Though a lack of a dominant big man reared its ugly head once again with Milwaukee scoring 60 points in the paint and winning the rebounding battle 65-36, Houston made up for those shortcomings by forcing 15 steals and draining 21-of-61 shots from long range. This team is playing with determination and confidence right now that can’t be matched!

The Lakers were one of the better cover teams in the league before it shut down in going 34-29-1 ATS and winning 50 games to just 14 losses. That however hasn’t been the case in the bubble where it’s gone 2-1 SU but just 1-2 ATS with the under cashing in two of those matchups. As it stands, LA will enter this likely go through the motions contest owners of 52-15 SU and 36-30-1 ATS records with the under cashing in 35 of their 67 played games. LBJ and his mates are the current +250 favorites to win the title and +150 chalk to represent the West in the NBA Finals.

The Rockets odds of winning the whole enchilada have actually gotten longer since initially hitting the board at 12-1. After defeating the Bucks, Houston currently checks in as +1600 choices to win a title since Hakeem Olajuwon and his mates did so while Michael Jordan was on a hiatus from the league. Their odds of winning the Western Conference stand at +700 with only the Clippers and Lakers owning shorter odds. Owners of the league’s top ranked scoring offense that’s absolutely loved shooting the rock in Orlando, you’d be a fool not to at the very least throw some beer money on those returns just in case this hot streak finds its way into October!

I honestly wouldn’t be shocked if both LeBron and “The Brow” sat this game out. There’s absolutely no reason to play either of those two with nothing for the team to gain by winning any of their remaining games. With that, Houston is going to be installed favorites to win this game and rightfully so. They have something to play for and will be playing all their regulars till the clock reads double zeroes. While LA still has plenty of talent on the roster to compete, I just don’t foresee Dwight Howard, Kyle Kuzma and Alex Caruso having enough in the tank to see it all the way through; not with how well Houston is shooting the rock right now. These teams split their pair of regular season meetings which moved the Rockets to 6-2 SU in the last eight meetings. The time for Russell Westbrook and James Harden to shine is now, and I firmly expect them to do just that on Thursday night regardless of whether LBJ and Davis are on the floor.