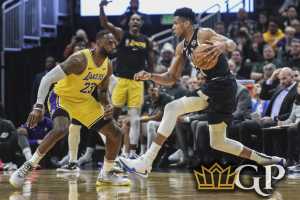 Friday night’s NBA schedule on ESPN features one of the most anticipated games of the season, as the Milwaukee Bucks visit the Los Angeles Lakers. It is a potential NBA Finals preview, as the Bucks are running away with the Eastern Conference, while the Lakers have a big lead in the Western Conference. The early game on ESPN is also intriguing, as the Miami Heat visit the New Orleans Pelicans. Let’s look at both games and Friday night ESPN NBA picks.

The early game on ESPN on Friday has the Heat visiting the Pelicans. Miami is in fourth place in the Eastern Conference, but they could be a threat, as they are the only team in the NBA to beat Milwaukee twice this season. Miami plays good defense and they have an offense that can be tough to stop. The Heat have one of the top 3-point shooters in the league in Duncan Robinson. He is third in the NBA in 3-pointers made this season and he leads the league in 3-point shooting percentage.  “Everybody wants to contribute in a way,” Robinson said to the media, “Obviously, the more tangible contribution is my shooting. But obviously, I would like to think that I do more than just that. It’s good to have a stat that reflects that. I think game-to-game plus/minus can be a little bit less indicative. But the large sample size [means something], for sure. I didn’t know that I was leading the team.” The Heat have the sixth-best offensive rating in the league and Robinson is a big reason why.

I expect both teams to score a lot of points, as neither team is that great defensively, so I will take the game over the total.

The Bucks have the best record in the league, while the Lakers have the second-best record. This could be an NBA Finals preview, but both teams have to get through a lot of tough teams in the playoffs. The Bucks would have to win all of their remaining games to tie Golden State for most regular season wins with 73 and that is not going to happen. Milwaukee could finish with the best margin of victory in NBA history, as they are outscoring teams by 12.2 points per game. They are right with the 1971-72 Lakers in terms of margin for victory. “We’ve still got a lot more basketball to play,” guard Wesley Matthews said. “And we know where we’re at and where we want to be. It’s a pretty special thing to be where we’re at in the standings.”

The Bucks have won seven of the last ten against the Lakers including the five. Milwaukee has also won the last three in Los Angeles.

This should be a classic matchup as each team will want to prove they are the team to beat. I think it will go down to the wire, so I will take the points with Milwaukee.