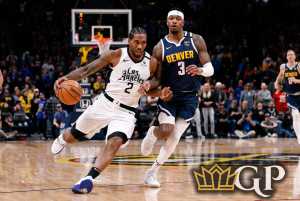 Friday night’s NBA schedule on ESPN features four teams that will end up in the playoffs. The first game has the Oklahoma City Thunder visiting the Milwaukee Bucks, while the late game has the Denver Nuggets visiting the Los Angeles Clippers.

The Thunder are in a battle for playoff positioning in the Western Conference. They are currently in 6th place, but just barely ahead of Dallas for 7th place. They are also just behind Utah for 5th place. In reality, it may not matter where they finish, as they are not going to finish in 8th place, so they won’t be playing the Lakers in the first round.

One thing that would help OKC going forward is starting games better. Only four teams in the NBA have scored fewer points in the first quarter than the Thunder. OKC is much better in the second quarter, ranking 12th in the league and they are okay in the 3rd and 4th quarters at 14th in the league.

OKC is in a bad spot on Friday, as they are playing their third game in four days and with no rest. They hosted Chicago on Tuesday, were off on Wednesday and home against the Kings on Thursday. The Thunder are averaging 111 points per game and giving up about 108 per contest.

The Bucks have already clinched a playoff spot, but it is all about winning the title for Milwaukee. They have one of the top players in the league in Giannis Antetokounmpo and he is averaging 30 points, 13.6 rebounds and 5.8 assists per game. Milwaukee is in a much better scheduling spot, as they last played on Tuesday in Toronto and then had Wednesday and Thursday off. The Bucks are averaging 120 points per game and giving up 108 per contest.

I think the situation is just too much for OKC to overcome, as they should be weary in this one, while the Bucks are rested. I will lay the points and take the Bucks.

The late game is a battle for second in the West between the Nuggets and Clippers. Most people think the Clippers are the team that can challenge the Lakers in the West, but the Clippers still trail Denver for second place. Head coach Doc Rivers has said that he is not worried about things, as he simply wants to get all of his players on the floor together. “I didn’t like how we were playing before the break and didn’t like the [Sacramento] game the other night but I’m not concerned by it, if you wanted me to be honest about it,” Rivers said to the media, “We just gotta get guys on the floor. We need more minutes together.”

The Nuggets will have had an extra day of rest and that could be the difference in a close game. I will take Denver plus the points in this one.