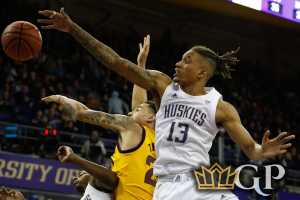 My Thursday night college basketball picks ended up going 1-2 ATS at online sportsbooks last week. The Michigan Wolverines simply couldn’t prevent the Wisconsin Badgers from hitting a 3-point shot all game and fell as decided favorites. Then the Arizona Wildcats went out and got schooled by the schizophrenic USC Trojans who ended up sweeping both desert schools. The ASU Sun Devils proved to be the only ticket cash after falling to UCLA at the gun; hopefully you got in early and took advantage of the hook. If not, you pushed. Here’s to closing out the regular season with some winners in the final installment of the year!

The Huskies had the Cougars on the ropes when the teams last hooked up back on January 23. We backed them in that game as near 10-point underdogs and came away thrilled to cash the ticket, but the Huskies seriously let the game get away. UConn took a 30-25 lead with it into the break by playing a suffocating brand of defense limiting both Caleb Mills and Dejon Jarreau in a big way. That however wasn’t the case over the game’s final 20 minutes with the former scoring 18 of his 20 overall points and the latter ending up with a near triple-double to help lead the Cougars to the come-from-behind 63-59 win and non-cover. Though the Huskies ultimately made a game of it, I can’t get the fact that it lost the rebounding battle by 14 caroms. On top of that, Kelvin Sampson’s kids were incredibly careless with the basketball in turning it over a whopping 18 times. Now knowing exactly what to expect and the Huskies down a few players from when they first met, I expect Houston to come out extremely focused and come up with the win that at the very least guarantees them a share of the AAC title with Tulsa on the road at Temple and Wichita State to close the regular season.

ASU did itself a major disservice by getting swept on the road last week against both UCLA and USC. In doing so, Bobby Hurley’s troops don’t really have a leg to stand on when it comes to winning the Pac-12 regular season title any longer with it now trailing the Bruins by two games. It would need to win out and have UCLA fall at the Trojans and Oregon to split its two skirmishes against Cal and Stanford just to have a shot of sharing the title. But that shouldn’t be the primary concern for the Sun Devils entering this bout with a Huskies team that’s managed just one win and pointspread cover the last 11 times it took to the hardwood. ASU handed them an 87-83 home defeat as 5-point underdogs during that streak by way of owning the glass and doing a better job from the charity stripe than the host Huskies. The bottom line here is that Remy Martin and his mates just got their lunch served to them on the road last week. If this club is to have any shot of competing for the Pac-12 Tournament title and guarantee itself a shot at Big Dance glory, it must get back on track and fine tune its game for a title run. I fully expect that to go down in this one!

Now back in the comforts of the McKale Center where the Cats have gone 12-3 SU and 10-5 ATS for the season, I firmly expect Sean Miller to have his kids ready for battle after getting thoroughly embarrassed in last week’s road trip to USC and UCLA. They failed to surpass the 50-point threshold against the Trojans, and then coughed up a 6-point halftime lead to the Bruins and lost by five in suffering yet another pointspread defeat away from Tucson. While Zona has had its fair share of issues on the road against conference opponents with a pulse, it’s taken care of business against the lesser foes. The Wildcats already went into Pullman and handed Wazzou an ugly 66-49 defeat as 9-point favorites to move to 9-1 SU and 8-2 ATS in the last 10 overall meetings. The Cougars actually logged an outright win as 11.5-point underdogs in last year’s visit to Tucson; think that’s still sitting in the Wildcats craw? WSU just snapped its four-game losing streak on the road against Washington. It’s still celebrating that win; look for the Wildcats to take advantage and take them behind the woodshed for the second time this season – Lay the chalk!