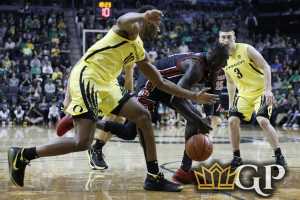 My Thursday night college basketball picks put forth successive losing efforts for the first time all season after posting a 1-2 ATS record versus the closing betting odds last week. Even so, only one of the positions taken was truly awful with Iowa simply getting rolled up and smoked by the Hoosiers in Bloomington to snap Indiana’s losing streak. Cincinnati should’ve covered what ended up being another inflated spread from the linemakers versus Memphis, but the Tigers kept hitting desperation threes when it mattered most. The lone victory of the night saw Colorado blow a huge lead in Eugene that allowed for the Oregon Ducks to storm back in the second half and tie the Buffs atop the Pac-12 standings. It’s time to get back on the winning track! That’s exactly what I’ll look to do tonight by breaking down some of the matchups to see if we can’t weed out more winners than losers!

For one reason or another, this will be the only regular season dustup between the Buckeyes and Hawkeyes. They opposed one another twice last season, and the home teams came out the victor both SU and ATS in each instance. Though Iowa ranks out higher than Ohio State in the Big Ten standings, it’s the Buckeyes that are playing what I deem to be championship caliber basketball right now. As for Iowa, it only just figured out how to win a game on the B1G road last time out in Minnesota against a Golden Gophers squad that’s regressed terribly over the last few weeks. Since falling at home to those same Gophers back on January 23, Chris Holtmann’s troops have been on a tear rattling off wins in five of their last six games with the lone defeat coming in a terrible showing in Madison a game removed from upsetting the Wolverines in Ann Arbor. Regardless of the roller coaster season, I still think Ohio State has the goods to make a deep run in March. I can’t say the same for Iowa, and it has everything to do with its porous defense. Look for the Wesson brothers to once again be a load, and for the Buckeyes to come out of Iowa City with a huge confidence building win.

I took the points and hammered the Beavers on the $-Line when these squads squared off in Corvalis back on January 12 regardless of the fact that the Wildcats had taken seven straight and covered the closing number at online sportsbooks in six of those games. The Wildcats entered that tilt off a grueling overtime loss to the Ducks, while the Beavers retook to their home hardwood off a disappointing loss to Arizona State. It was the perfect synergy. ORST needed a big bounceback win, and the Wildcats served as the perfect situational opponent with fatigue playing a role. That’s exactly what occurred. Zona played even through one half of play, but then got blown out 51-34 in the second stanza to fall by an 82-65 final count as 4-point favorites. I expect the Wildcats to be laying closer to 10-points in the rematch, and I’ll be laying those points even though Sean Mannion and company haven’t treated us well when laying points in the past; cough USC cough! Regardless, there won’t be any looking ahead to the Ducks here with Arizona also looking to avenge that ugly defeat in the Gill Coliseum – lay the chalk!

A game removed from unloading on the Sun Devils plus the points and on the $-Line against Oregon State, I also took the points with Bobby Hurley’s troops in their trip immediately following to Matthew Knight Arena. Though ASU ultimately went on to lose the game by a 78-69 final count, it just managed to sneak within the closing 10-point spread. In doing so, they still only moved to a bankroll killing 1-9 SU and 3-7 ATS the last 10 times they squared off against Dana Altman’s Ducks. But for the purposes of this investment, the over cashed for the third time in the last four meetings and I’m expecting points to once again hit the board in this final meeting of the regular season. Since embarrassingly falling 67-65 at Wazzou at the end of January, ASU has rattled off five straight wins against Washington, UCLA, USC, Stanford and Cal. The main reason why has been because of Remy Martin and company finally lighting it up offensively. They went for 80+ points in three of those contests to cash over tickets four times and will no doubt be pushing tempo in this rematch with the Ducks back in front of the hometown faithful – hit the over!