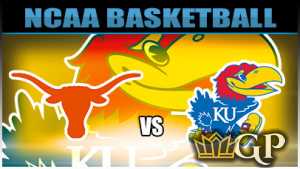 It is a matchup of Top 10 teams on Saturday, as the No. 8 Texas Longhorns take on the No. 3 Kansas Jayhawks on ESPN 2. Texas comes into this game at 7-1, while Kansas is 8-1. Let’s look at this matchup for Saturday and college basketball picks.

It is a matchup of Top 10 teams on Saturday, as the No. 8 Texas Longhorns take on the No. 3 Kansas Jayhawks on ESPN 2. Texas comes into this game at 7-1, while Kansas is 8-1. This game takes place at Allen Fieldhouse in Lawrence, Kansas with a start time of noon Eastern time. Both teams are coming off layoffs, as the Longhorns have not played since December 20, while the Jayhawks have not played since December 22. Let’s look at this matchup for Saturday and college basketball picks.

The Longhorns are ranked No. 8 in the latest AP Poll and that is the highest ranking they have had under head coach Shaka Smart.  Saturday’s game will be the first Top 10 matchup for Texas since 2014 when they were ranked No. 6 and Kentucky was ranked No. 1. Texas comes into Saturday’s game at 7-1 SU and 4-4 ATS. Five of their eight games have gone under the total.

The Longhorns could definitely be rusty, as they have not played in almost two weeks. Saturday’s game will be the first true road game for Texas this season. The Longhorns did play some neutral site games, but this game will be in Lawrence. Texas will find out just how good they are as they will take on a number of Top 20 teams in the next few weeks.

Texas has been very balanced in scoring, with Coleman, Brown, Andrew Jones and Courtney Ramey averaging double-digits per game. Kai Jones is not far behind those four at 8.8 points per contest. “It's an exciting team to watch, it's a team that can be really, really good,” Smart said to the media, “We've got a lot of room for growth. We've got some exciting individual players on our team that are fun to watch.”

Kansas could also be rusty, as they have not played in 10 days. It will be the longest break that head coach Bill Self has ever had to deal with. Kansas has not played a lot of top competition, as their toughest game was early in the season against Gonzaga. The Jayhawks are coming off a 79-65 win over West Virginia in a game that took place December 22.

We don’t really know how the layoff will affect each team, but there is no doubt that each team could be rusty. The one thing that helps each team is that they are very deep and a lot of players who get regular playing time. There should not be any issue of fatigue, but there is no question the shooting could be a bit off. Texas has played the tougher schedule, but Kansas did play Gonzaga and Kentucky. There will be some fans in attendance at Allen Fieldhouse, but don’t confuse what you see on Saturday with a normal KU crowd. The Jayhawks will have the home court edge, but it will be nowhere near the edge they normally enjoy. I lean toward taking Texas plus the points and I also think the total could be worth playing. Both of these teams have gone under the total five times and the layoff could definitely affect both team’s shooting. I will also go under the total in this game.