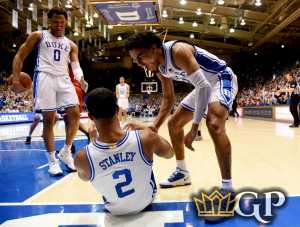 I enjoyed sweeping the board with my Saturday night college basketball picks so much the week prior that I decided to do it again this past weekend! Michigan State got the night started off right by going into College Park and skunking Maryland right from the opening tip. Then Malachi Flynn and the San Diego State Aztecs battled back from a halftime deficit to cover the number for me at Nevada. Closing the night out was the USC Trojans who went on to bust the brooms out on both Arizona schools by taking care of the Sun Devils by 10 points. It’s been a rough go for me on Saturday’s a bulk of the season, but I’m running hot entering the best part of it. Here’s to hoping we close the regular season out with another sweep!

I still can’t believe UNC prevented me from cashing a nice $-Line ticket when they ran with the Dookies in the first meeting. Seriously guys, hit your free throws and stop turning the damn basketball over! The Blue Devils were laying 7.5-points in that game. With that, it’s likely Duke is laying double-digits in the rematch. Should that be the case, I suggest you run, not walk, to the front of the line and throw your hard-earned money down on Cole Anthony and the guys in the powder blue unis. While the Blue Devils have covered each of their last three home games against Virginia Tech, NC State and Notre Dame, none of those three teams can hold a candle to the talent and athleticism UNC possesses. On top of that, the Heels are running hot winning and covering three straight. After choking big time in the first meeting, look for an inspired effort from the Tar Heels who will be going all out to prevent the Dookies from winning the ACC regular season title for the 20th time and first since the 2009-10 season.

So I laid the 2.5-points with the Bearcats when they invaded the Liacouras Center back on January 22 thinking Jarron Cumberland and his mates would have no issues whatsoever dealing with the Owls porous defense. That proved to be the case after Cincy went on to shoot 52 percent from the field and drain 9-of-23 shots from beyond the arc. What I didn’t envision occurring however was the Owls also having their way offensively against one of the more efficient defenses in the country (No. 43). I remember sitting and watching in awe as both teams exchanged points with relative ease. Cincy took a 41-40 lead with it into the break, and then went on to outscore Temple 48-42 in the second half to log the 89-82 win and cover. Needless to say, the combined score destroyed the total – it closed 132.5! With that, I’m expecting this rematch to play out to what linemakers originally expected and for points to be tougher to come by – hit the under!

The Ducks have done an exceptional job avenging losses this season. The first occurred back on February 13 when it scored the 68-60 comeback win and cover against Colorado after the Buffaloes took them down by a 74-65 final count as 2-point home favorites in the first meeting. The second just went down in Eugene against an Oregon State team that staged a dramatic second half comeback to log the 63-53 win and cover as 3.5-point home dogs back on February 8. Payton Pritchard and company just avenged that defeat by logging the impressive 69-54 win and cover as 10-point home chalk last weekend. Which brings us to Saturday night’s crucial bout against a Stanford team that like the Beavers staged a second half comeback to hand Oregon a 70-60 defeat to open up the month of February. The Ducks were outscored 42-24 in the second half of that game, and Coach Altman was pissed off about it in the postgame presser. The Ducks have won and covered five of the last six times they played host to the Pac-12 rival Cardinal, and I fully expect them to come out determined to lay the wood to the Tree!