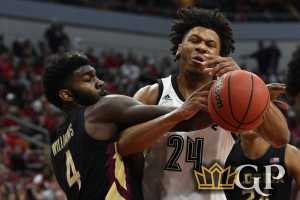 It was Splittsville once again for my Big Monday ESPN college basketball picks with the over in the North Carolina/Notre Dame game and Iowa State Cyclones. The former got there by way of a fabulous late game push that saw the Fighting Irish log the 77-76 win and non-cover due to sophomore Nate Laszweski’s end-game 3-ball that propelled Mike Brey’s kids to the exhilarating come-from-behind victory. The Clones looked like they might give Kansas a run for its money early on in the first half, but the Jayhawks took a 10-point lead into the break and then outscored them by 10 again in the second half to cover the hefty impost even with a trip to Waco on deck. As Darth Vader would say, “Impressive!” Enough of losing juice on Big Monday! There aren’t many of them left so let’s pinpoint a few winners and see if we can’t pull off the sweep!

A big ones set to go down in the Donald L. Tucker Center on Monday night when the Seminoles return home from a tough road trip to Raleigh in hopes of potentially solidifying its placement as the top dog in the ACC. That’ll all depend on whether it disposes of the Wolfpack or not. As it stood going into the weekend’s action, the Louisville Cardinals stood atop the conference standings with a 13-3 overall record. It hosts North Carolina on Saturday before making the trek to Tallahassee. With a likely second straight win tallied after roasting Syracuse in the KFC Yum! Center previously, the Ville will be locked into this matchup 100 percent knowing full well it was Florida State that handed them their only loss of the season when in front of the hometown faithful. FSU did so by shooting a scorching hot 55 percent from the field while draining 11 of 23 shots from deep. It also forced the Cardinals into 16 turnovers and won the battle of the boards. The game occurred immediately after the overtime defeat to Kentucky, so it’s highly likely Jordan Nwora and company entered the tilt a bit hungover. It was also the first game of the New Year. None of those obstacles should deter Louisville in the rematch. After dropping their previous two road tilts at Georgia Tech and Clemson, I firmly expect Chris Mack’s troops to make amends and return the favor by handing the Seminoles a bitter home defeat that costs them more than any other.

So I faded the Jayhawks in what was one of the regular season’s biggest lookahead spots and came out a loser last Monday night. What to do coming off their biggest game of the season with a share of the Big 12 regular season title on the line? No choice but to ride the fade train once again regardless of what goes down in Waco Saturday afternoon. Bill Self’s kids will be laying a heaping pile of home chalk with a Cowpokes squad it beat by 15 up in Stillwater invading the Phog. Kansas had no issue covering the closing 7.5-point college basketball odds in that matchup even though it only shot 39 percent from the field overall. Freshman Christian Braun was the main reason why the Jayhawks churned out the wire-to-wire win and cover with 16 points and a team-high 9 rebounds. It also helped that the defense limited Lindy Waters III and his mates to a 28 percent showing from the field which included an absurd 2 of 18 showing from the Land of 3. The win pushed the Jayhawks to 7-3 SU but just 5-5 ATS the last 10 times they squared off against the Cowpokes. Even though KU has won and covered each of the last two times it hosted this rivalry, I can’t help but think they leave everything on the floor in Waco win or lose. It’s going to be nearly impossible to get up for this matchup 48 hours later, and even harder to win the game by margin knowing full well linemakers are going to make them eat a ton of chalk. Hold your nose and take the points!