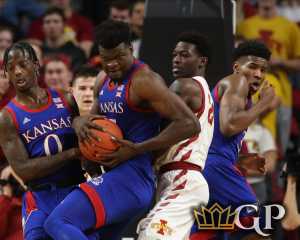 It was a third straight week of splitting Big Monday recommendations with the Duke Blue Devils and Baylor Bears. Though the Dookies were seemingly never in a position to lose the game outright to the Noles, they were also never in a position to cover what proved to be an inflated pointspread; we’ve seen a lot of those recently! While the Longhorns finally didn’t wilt in the second half like I expected them to do once again, they still allowed the Bears to cover in a hard fought win and cover in Austin. The Kansas Jayhawks and UNC Tar Heels have been locked into ESPN telecasts on Monday or Tuesday for what feels like months now. This time around it’s Big Monday; let’s see if we can’t pick out a few winners instead of eating juice this time around!

Notre Dame is going to find itself in an excellent position to finally put an end to its seven-game losing streak to the Tar Heels when the teams collide in the Purcell Pavilion on Big Monday. It’s been as tough a season Roy Williams has ever experienced throughout his coaching career, and it could lead to him hanging his whistle up in the very near future. At 10-14 overall and managing just three wins in ACC play, this year’s version of the Tar Heels will go in the record books as the worst he looked over throughout his time in Chapel Hill. Even so, I expect it to go down swinging in this one against a Fighting Irish team that’s surprisingly left much to be desired at the defensive end of the court; very unusual for a Mike Brey coached team. The Irish give up nearly 68 points per game and have been horrendous at defending the 3-ball (No. 225). While UNC’s offense has been ugly up and down the board, ND’s defense will come as a breath of fresh air after being forced to deal with Virginia’s pack line defense last time out. Look for some points to hit the board in this one regardless of these teams playing to low scorers seven of the last eight times. These are much different teams now than they were than; Cole Anthony and John Mooney will steal the show – hit the OVER!

Just how determined will the No. 3 ranked Jayhawks be to smash Iowa State again when they close their regular season rivalry out with the Cyclones on Big Monday? My money says not so much! Not After going into Ames and handing the Cyclones a one-sided 79-53 defeat as 5-point road chalk back in early January, and having a huge clash with the Baylor Bears in Waco on deck. That meeting with Scott Drew’s kids is a huge revenge matchup after Jared Butler and his teammates went into Lawrence and handed KU a 67-55 defeat to earn the program its first ever win in the Phog. Should Kansas get up by any substantial margin against the Clones, I simply don’t foresee Bill Self running the risk of getting one of his studs injured by keeping them on the hardwood if not needed. With that, the backups and bench warmers are likely going to play a large role in how this one plays out. Even with Tyrese Haliburton no longer in the mix for the visitors due to a season-ending wrist injury, I’m banking on the Cyclones No. 1s being good enough to cover what’s likely to be a drastically inflated pointspread. With one eye on the Clones and the other looking forward to Saturday’s huge throw down with the Bears, I can’t help but take as many points possible with the ugly dogs.