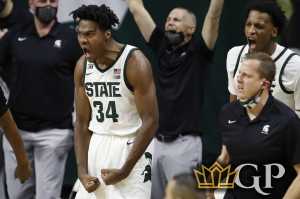 A pair of Top 20 teams get together on Wednesday night on ESPN in the Big Ten/ACC Challenge, as the 4th-ranked Michigan State Spartans visit the 18th-ranked Virginia Cavaliers. Let’s look at this matchup for Wednesday night and college basketball picks.

A pair of Top 20 teams get together on Wednesday night on ESPN in the Big Ten/ACC Challenge, as the 4th-ranked Michigan State Spartans visit the 18th-ranked Virginia Cavaliers. The Spartans come into this game unbeaten at 5-0, while the Cavaliers are 3-1. This is an interesting matchup of styles, as Michigan State wants to run and gun, while the Cavaliers would prefer to slow things down. It is also a matchup of brothers, as Joey Hauser leads Michigan State in scoring at 14 points per game, while his brother Sam Hauser leads Virginia at 14.5 points per contest. Let’s look at this matchup for Wednesday night and college basketball picks.

It was not supposed to be this way for the Hauser brothers, but they will go against one another on Wednesday night. They both transferred from Marquette in the spring of 2019 but they went separate places. Joey went to Michigan State, while Sam went to Virginia. Joey is coming off a big game on Sunday, as he had a career-high 24 points and 10 rebounds in a win over Western Michigan. Now Joey will go against his older brother Sam.  “I'm extremely excited about it,” said Joey to the media, “I knew we had to get past this game ..., so I wasn't looking forward to the Virginia game yet. But now we'll start to study them and prep for them. I don't want to make it about me and my brother, because we're playing Virginia. We're not going down there to play the Joey Houser-Sam Houser game, it's Virginia versus Michigan State. And that's what I want it to be about.”

The focus in this game will be on the Hauser brothers, but the player to watch is Michigan State guard Rocket Watts. He has been carrying a big load early in the season for Michigan State. He was a little weary in the win against Western Michigan but he still had 10 points and six assists. Virginia is almost always known for their defense, but so far this season the Cavaliers haven’t been playing a stifling defense. Watts should be able to penetrate and set up his teammates for a lot of good looks on Wednesday night.

Michigan State is 5-0 SU, but just 2-3 ATS. They failed to cover the spread when they were big favorites against Eastern Michigan, Detroit and Western Michigan but they covered against Duke and Notre Dame. Three of the five games went over the total.

Virginia is 3-1 SU and 2-2 against the spread. They played well in their opener against Towson but then played poorly in a loss to San Francisco, did just enough to cover against SFPA and then played poorly again in an overtime win against Kent. They have gone over the total twice and under twice.

There is no doubt that Michigan State is one of the top teams in the country, but I don’t know that Virginia is on their level. Perhaps Tony Bennett can get his team playing lockdown defense and he can find enough offense, but right now the Cavaliers are not ready to handle a top team. I expect that Michigan State will be focused and ready for the big stage and I see no reason they won’t handle Virginia.  This will be a good test to see exactly where both teams are. It is still early in the season so I don’t want to get too down on the Cavaliers, but I have not been impressed with what I have seen to this point. One thing we do know is that Virginia can’t be allowing opposing teams to hit 36% from three-point range and that is where the Cavaliers are right now. I can’t see the pointspread on this game being double-digits and that is what I would need to see to consider taking the Cavaliers.  I will lay the points and take Michigan State in this contest.