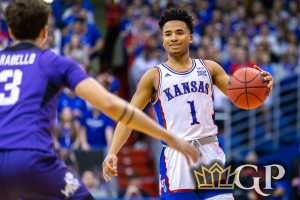 Regardless of whether fans will be in the stands for the entirety of the NCAA Tournament or not, it looks like the games are going to be played even with the pandemic that is the Coronavirus. Let's look at March Madness Contenders.

Regardless of whether fans will be in the stands for the entirety of the NCAA Tournament or not, it looks like the games are going to be played even with the pandemic that is the Coronavirus shaking the foundation of sports to its core. With that, there is still money to be made and the purpose of this piece is to target teams linemakers at online sportsbooks have deemed favorites to cut the nets down in April. Seriously though, who’s to say who is a surefire bet and who isn’t as wide open the tournament looks to be in 2020? Even so, it’s my job to find the winner of this whole darn thing, and that’s exactly what I’m set out to do. With a No. 1, 2 or 3 seed reaching the Final Four 70 percent of the time since the field was expanded to 64 back in 1985, these are the teams I have pegged as this tourney’s edition of March Madness contenders.

Bill Self’s Jayhawks are likely to be the No. 1 overall seed in the tournament after compiling a 28-3 regular season record which saw them win all but one of their 18-played games in Big 12 play. With Devon Dotson at the point and Udoka Azubuike patrolling the paint, the Jayhawks boast one of the premiere scoring combos in the country that combines to average 31.8 points, 14.6 rebounds, 4.9 assists and 2.7 blocks per game. Though void of a third bigtime scorer, one of the trio of Ochai Agbaji, Marcus Garrett or Isaiah Moss always seems to step up when needed. That attack paired up with a defense ranked No. 2 in efficiency per the current Pomeroy Ratings lets it be known just how serious a contender the Jayhawks are at cutting the nets down for the first time since 2008 – Rock Chalk!

Say what you will about the Zags making minced meat of the WCC every passing season, Mark Few has built one heck of a program and has a heck of a team at his disposal once again heading into the 2020 tourney. They showed as much in the WCC tournament final by flipping the switch in the second half against St. Mary’s to turn a 42-41 halftime lead into an 84-66 waltz back to the ticket window that allowed Bulldog backers to cash their tickets with relative ease. Anchored by six double-digit scorers and the ability to light it up from beyond the arc, Gonzaga is likely to be installed a No. 1 seed out west and would get the benefit of playing in its own backyard to reach the Sweet 16. From there anything is possible with experience littered up and down the roster.

Like many teams in the Big Ten, the Spartans went through a rough period that had many abandoning ship through the middle of February. But since getting embarrassed at Michigan back on February 8, Sparty once again looks like the team that entered the season ranked No. 1 in the polls. It enters B1G tourney play winners of five straight and came a bucket short of covering each and every one of those games against the closing college basketball odds. Like Kansas, MSU possesses one of the more intimidating big/guard combos in the country with Cassius Winston and Xavier Tillman combining for 32.3 points, 12.8 rebounds, 8.9 assists and 2.1 blocks per game. With Rocket Watts coming on late and Aaron Henry a viable third scoring option, the Spartans will be highly under seeded if in fact it’s a No. 3 seed as currently predicted.

For one reason or another, the betting markets didn’t buy into Scott Drew’s kids over the course of the regular season. Every time they had a big game, public bettors were running to the window to fade Jared Butler and his mates. The decision to do so killed bankrolls after Baylor went on to win 26 of 30 played games and covered the closing CBB odds in 18 of those matchups. Due to losing the regular season title to Kansas over the final weekend, the Bears odds of winning the NCAA tournament have fattened up quite a bit. If you still don’t have any Baylor shares in your national championship portfolio, now’s the time to take a position. The Bears ability to play lockdown defense, rebound and stroke the 3-ball is something you’re going to want a piece of the deeper we get into the tournament.

While I’d feel much better about this position knowing Ashton Hagans would be back with the team, it’s currently under the assumption that he will be manning the point guard position for the Wildcats once the Big Dance comes around. With that, 16-1 on a team this loaded is a steal of a value and one that should be pounced upon immediately! Immanuel Quickley just might be the most dynamic player in the country. When you pair him up with Nick Richards and his near double-double averages down low, the Wildcats boast athleticism and scoring talent unlike many other teams in this tournament. This squad had its heart ripped out by Auburn in the Elite Eight last season and will be going all out to advance even further this time around. With that, KY Jelly is very live to cut the nets come April!