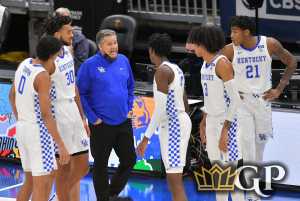 Is there ever a must-win college basketball game in the month of December? The answer is probably not, but the closest thing to a must-win game for the Kentucky Wildcats takes place on Saturday against Louisville on ESPN. Let's look at CBB picks.

Is there ever a must-win college basketball game in the month of December? The answer is probably not, but the closest thing to a must-win game for the Kentucky Wildcats takes place on Saturday against Louisville on ESPN. The Wildcats are in a complete freefall, as they are 1-5 and on a five-game losing streak, while Louisville is 5-1. Let’s look at this matchup for Saturday and college basketball picks.

The Wildcats are off to their worst start in recent memory, as they are 1-5 for the first time in almost 100 years. They have a great coach in John Calipari, but so far very little has gone right for this year’s Kentucky team. It is a circle the wagons moment on Saturday for Calipari and his team. He is definitely taking motivation from ESPN saying, “There are a lot of trolls out there right now,” Calipari said to the media, “And let me say this, they just moved our game from ESPN2 to ESPN. Why do you think they did that? We know why you put this on ESPN instead of ESPN2. You want more people to go to the execution! Well, we ain’t having it.”

The Cardinals come into this game at 5-1 SU and 3-3 ATS. They have gone over the total three times and under three times. They are coming off a 64-54 win against Pittsburgh on Tuesday. Head coach Chris Mack was happy with the win, but he knows his team has to get better. “We have to continue to improve,” Mack said to the media, “You obviously worry about you team’s psyche coming out of Wisconsin. So to go back-to-back games on the road and come up with a victory in the second one after getting drubbed I think says a lot about our players and their character and wanting to win. We know we’re going to get a lot better team than Kentucky has been all year. They’ve been really good in some games. The (North) Carolina game is a perfect example. I’m pretty sure we’re going to get their best.”

Samuel Williamson who leads the Cardinals in rebounding and in blocks said that he is excited for Saturday’s game.  “I’ve seen them on TV and stuff but from a scouting perspective I haven’t watched their offense and defense,” he said to the media, “But (the rivalry) is always important. From the jump as soon as I committed here I understood how big a rivalry it is. It’s one of the best rivalries in the country. … I’m just real excited. This is the game everybody talks about all year. I’m excited the next few days to get out there to practice and prepare.”

There is no question that this is a key game for Kentucky if they hope to turn the corner on this season. I don’t know that Louisville is anything special, as they were blown out by Wisconsin and their win over Pittsburgh wasn’t anything special. I also don’t know that Kentucky is as bad as they have played. The value could be on the Wildcats in this game. I expect that Louisville will be listed as a 5 or 6-point favorite in this contest. I will take the points with Kentucky on Saturday.