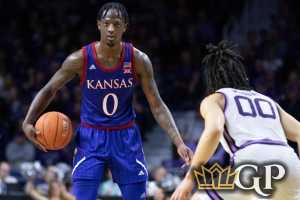 Are you ready for college hoops? The 2020-21 season begins this week with one of the top matchups taking place on Thursday, as No. 2 Gonzaga takes on No. 5 Kansas on FOX. Let's look at college basketball odds and college basketball picks.

Are you ready for college hoops? The 2020-21 season begins this week with one of the top matchups taking place on Thursday, as No. 2 Gonzaga takes on No. 5 Kansas on FOX. It is somewhat rare when big college basketball games take place on Thanksgiving because turkey day normally is all about football. FOX may get a few people to switch over because the two early NFL games are not that attractive and this college hoops game has high appeal. Gonzaga is expected to be listed as the favorite in this neutral site contest. Let’s look at the game between the Jayhawks and Bulldogs and college basketball picks.

The Jayhawks are always good and this year they check in with a No. 5 national preseason ranking. They are led by senior guard Marcus Garrett who is considered one of the top five guards in the country. They also have Ochai Agbaji who is one of the top wing players in the nation. Not to be left out is junior David McCormack who has big shoes to fill. Head coach Bill Self said that McCormack has looked really good in practice and that he can fill the shoes of Udoka Azubuike.

Garrett is the reigning National Defensive Player of the Year and he is a great defender. He is not yet, however, a great shooter, but he did put in a lot of work in the off-season and he could be vastly improved this season.

The Bulldogs have a potent trio of Corey Kispert, Drew Timme and Jalen Suggs. Kispert hit 43.8% of his 3-pointers and last year and was a first-team All-WCC selection. He is ranked by some as the second-best wing player in all of college hoops. He is joined by Timme who averaged 9.8 points and 5.4 rebounds per game as freshman, and shot 61.8% from the floor. Suggs will be playing his first game for Gonzaga but the freshman is already considered one of the top guards in the country. Gonzaga is so deep that redshirt junior Joel Ayayi, who averaged over 10 points per game last season, is on the preseason Naismith Trophy watch list.

When you look at this game there is no doubt that Gonzaga should be the better team. The problem I have with taking the Bulldogs is that I don’t like laying points with Mark Few teams and Gonzaga has been poor against the spread recently in neutral site games. It is pretty much a given that Gonzaga is going to be favored in this game. The question is how high the line will be. The Jayhawks did lose a couple of top players from last season but at Kansas they just reload. I think Garrett is going to have a great year for Kansas and anytime that you have a great guard your team has a chance. Garrett should show Suggs that he is not yet ready for prime time. I give Kansas the definite edge in the backcourt. The issue for the Jayhawks is upfront. If you belief Bill Self, then McCormack is in for a big year. If that is the case then Kansas might be able to keep the frontcourt battle relatively close. If Kansas can hold their own down low, they should have the edge.

I think the matchups could favor the Jayhawks on Thursday and keep in mind that this is a neutral site contest. There will be no edge for Gonzaga in terms of a home court and the Bulldogs are a team that I have a hard time trusting as a favorite. I expect that Gonzaga will be listed as a solid favorite and any time that Kansas is getting points, they are a worth a strong look. I will take the Jayhawks plus the points in this contest.