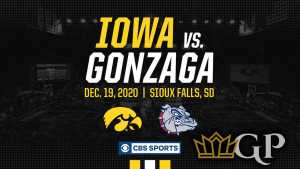 It is No. 1 vs. No. 3 on Saturday on CBS, as the top-ranked Gonzaga Bulldogs take on the third-ranked Iowa Hawkeyes on a neutral floor in Sioux Falls, South Dakota. Let’s look at this matchup for Saturday and college basketball picks.

It is No. 1 vs. No. 3 on Saturday on CBS, as the top-ranked Gonzaga Bulldogs take on the third-ranked Iowa Hawkeyes on a neutral floor in Sioux Falls, South Dakota. Both teams enter this game unbeaten, but Iowa has played more games, as Gonzaga had to deal with COVID-19 issues. In fact, the Bulldogs haven’t even played a game since December 2nd, while Iowa has played four games since that time. The layoff could be a huge problem for Gonzaga against an Iowa team that features one of the top players in the country in Luka Garza. Let’s look at this matchup for Saturday and college basketball picks.

There is no doubt the focus on Saturday will be in the middle, as the two best players are the floor are Gonzaga’s Drew Timme and Iowa’s Luka Garza. Not only do they lead their teams in scoring, they are in the mix for the National Player of the Year Award. They should also be matched up against one another on Saturday. No one has been able to stop Garza so Timme has his work cut out for him. Garza is averaging 29.2 points per game and is shooting 69% from the field. Garza is 6’11 and 265 pounds so when he gets the ball he is virtually impossible to stop. Timme will need some help, but it is difficult to double-team Iowa because they have so many good shooters and Garza is an excellent passer.

On the other side it will be Garza trying to defend Timme who averages 23.3 points per game and that won’t be easy. Timme is not as big and bulky as Garza but he moves very well and he gets up and down the court pretty good for a big man. He could thrive in a high scoring game that is expected on Saturday. The goal for Gonzaga will be to push the pace and try and wear down Garza.

The Bulldogs may plan to clamp down on Garza but it is risky to double-team him because Iowa has other players who can score. Iowa is hitting more than 11 three-pointers per game which is 9th-best in the country. Teams that have tried to double-team Garza have ended up leaving the Iowa guards wide open for 3-point shots. There is no good answer for Gonzaga on Saturday, so it is a matter of pick your poison.

Normally I wouldn’t get too involved in talking about the benches, but this game is going to be high scoring with both teams running and gunning. There is no question that bench players are going to play a major role in this game. When it comes to the benches, Iowa has a huge edge. Gonzaga has just seven players who average double-digit minutes per game, while Iowa has nine players who average at least 15 minutes per game. If this game comes down to which team has more energy, and it very well may, then Iowa has the advantage. It also helps Iowa’s cause that Iowa’s bench averages over 40 points per game, while Gonzaga’s bench averages just over 17 points per contest.

The early line on this game has Gonzaga listed as a 3-point favorite. With everything I have seen from both teams I don’t know that the Bulldogs should be favored. I know Gonzaga has the high profile win against Kansas but the Jayhawks are young. Iowa also has a high profile win, as they took care of North Carolina. This game on Saturday is a neutral site game, so there will be no advantage for either team and there will be no fans in attendance. I think Garza gives Iowa the edge in the middle, while Gonzaga may have a slight edge in terms of guard play. There is no question that the edge in terms of benches is with Iowa and I also think the layoff could be a bit of a problem for the Bulldogs. I’ll take the points with the Hawkeyes on Saturday in a game I expect them to win outright.