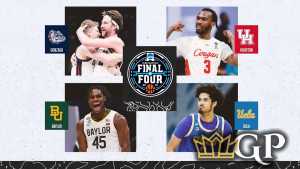 Gonzaga has been the team to beat all year in college basketball. The Bulldogs are out to become the first team to finish the year undefeated on its way to a national championship since the 1976 Indiana Hoosiers. Let's look at Final Four Best Bets.

Gonzaga has been the team to beat all year in college basketball. The Bulldogs are out to become the first team to finish the year undefeated on its way to a national championship since the 1976 Indiana Hoosiers. They are 30-0 coming into their Final Four showdown with UCLA, and that has the Zags listed as -204 favorites to win it all. No matter who wins the NCAA Tournament though, it will be that school’s first national championship this century.

These former Southwest Conference rivals will meet for the first time since 2002. Houston has a 38-15 record against Baylor, but the Cougars are a moderate underdog in this game.

Baylor has made it to the Final Four for just the third time in its history. This will be the Bears’ first appearance in the Final Four in over seven decades. Scott Drew has not only taken this program out of the mess that Dave Bliss left it in, but he has led Baylor to its most successful decade of basketball in program history. They were a No. 1 seed in the NCAA Tournament for the first time this season.

As for Houston, Kelvin Sampson has brought prestige back to the Cougars. This program looked like a burgeoning juggernaut under Guy Lewis in the early 1980s, as Phi Slama Jama was responsible for three straight trips to the Final Four. However, Houston had not won an NCAA Tournament game since 1984 before Sampson led the school to March Madness for the first time in 2018.

The Bears enter this game at 26-2. They have won all their tournament games by at least nine points, but they had to struggle against another former SWC school in Arkansas in the Elite Eight.

This is one of the most efficient offenses in the country. Baylor ranks 3rd in offensive efficiency per Ken Pomeroy, and the Bears lead the nation in three-point shooting by hitting 41.1% of their threes. Jared Butler, Davion Mitchell, MaCio Teague, and Adam Flagler are all knocking down at least 40% of their chances with over 100 attempts to their name. The Bears are one of the best teams when it comes to forcing turnovers too.

Houston leads the nation in defensive field goal percentage. Opponents have had a tough time scoring against the Cougars all year, and no team has been able to top 61 points against Houston in the NCAA Tournament. Quentin Grimes is a lights out perimeter shooter, and this team does an excellent job getting offensive rebounds, but the Cougars aren’t particularly efficient on offense.

It’s starting to feel inevitable that this is Gonzaga’s year. The Bulldogs have taken on and defeated all challengers, including Kansas, West Virginia, Virginia, and Iowa in non-conference play. Only one team (West Virginia) has stayed within single digits of Gonzaga, as the Zags were not tested in their four NCAA Tournament games, winning each game by at least 16 points.

UCLA was fortunate to make it to the NCAA Tournament. The Bruins seemed likely to make it to March Madness with a 17-5 record, but they lost their last three regular season games and then were bounced by eventual Pac 12 Tournament champion Oregon State in their first game of that tournament. The committee sent the Bruins to the First Four where they had to overcome Michigan State in overtime, but UCLA proved the class of the Pac 12 with its performance over the last two weeks.

The Bruins beat BYU and Abilene Christian to make it to the Sweet Sixteen before overcoming Alabama in overtime and beating Michigan 51-49 in the Elite Eight to make it here. Mick Cronin’s team is a huge longshot to win it all though.

Gonzaga has four superstars in Drew Timme, Jalen Suggs, Corey Kispert, and Joel Ayayi. All four players may end up being first-round picks in the NBA Draft, and they make this Bulldogs’ offense the most dominant one in the nation. They rank first in offensive efficiency, effective field goal percentage, and two-point percentage. All five starters are making at least 58.8% of their shots.

This UCLA team can’t be classified as a Cinderella since the Bruins have more national championships than any other program in the nation. However, the Bruins are certainly fortunate to be here and made the most of their season. UCLA is not particularly great on either end of the floor, and that’s why this team has almost twice as many losses as the other three Final Four teams combined.