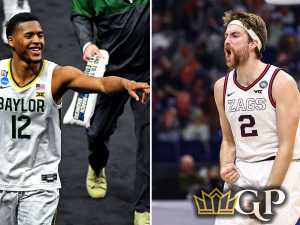 We are sure to have a doozy of a national championship game on Monday night. The top-ranked Gonzaga Bulldogs meet the second-ranked Baylor Bears on CBS for the title. Let's look at College Basketball National Championship Picks.

Mark Few and Gonzaga are out to make history in more ways than one. The Bulldogs are not only hoping to win their first national title, as they are also looking to become the first undefeated national champion since the 1976 Indiana Hoosiers. Gonzaga is currently 31-0 coming into this game with wins over Kansas, West Virginia, Iowa, and Virginia in the regular season and victories over Oklahoma, Creighton, USC, and UCLA in the NCAA Tournament.

Baylor won 18 straight games to start the season. The Bears’ only two losses came against Kansas and Oklahoma State, and they knocked off both of those teams when they met in Waco. They beat Illinois in non-conference play and haven’t been seriously tested in the NCAA Tournament with comfortable wins over Wisconsin, Villanova, Arkansas, and Houston.

This Gonzaga team is one of the most talented we’ve seen in recent memory. All five of the Bulldogs starters are likely to be in the NBA within the next few years. They don’t have much depth, but they don’t need to have a lot in reserve with so much star power on the floor.

Senior Corey Kispert is the team’s leader. Kispert was named the West Coast Conference Player of the Year this season, and he led Gonzaga in scoring during the regular season. He is averaging 18.8 PPG and making 44.5% of his threes to lead the Bulldogs in that category.

Drew Timme has taken over in the NCAA Tournament. The 6’10 center is averaging 19.2 PPG and 7.1 RPG to lead the Bulldogs in both categories, and he has scored at least 22 points in Gonzaga’s last four games. We have seen him get in foul trouble in his last two games, so he must avoid that given his importance against Baylor. He stands to be the difference maker because of his size.

The best player on the court might be Jalen Suggs. The freshman guard is projected to be one of the first players off the board in the 2021 NBA Draft. Suggs etched his name in history with his game-winning buzzer beater against UCLA, and he is a complete player with 14.1 PPG, 5.5 RPG, and 4.6 APG.

Gonzaga has the best offense in the country. The Bulldogs lead the nation in adjusted efficiency per Ken Pomeroy. They are particularly dangerous inside the arc, sinking an NCAA best 63.9% twos.

Baylor ranks second in offensive efficiency. The Bears are the best three-point shooting team in the nation, knocking down 41.2% of their threes.

Adam Flagler and Matthew Mayer are also sharpshooters from downtown, but Baylor doesn’t have a lot of size. The Bears do a good job on the offensive glass, ranking sixth in offensive rebounding percentage, but this team can get outmuscled down low by athletic big men.

The Bears will need to force turnovers to pull off the upset. They rank third nationally in forced turnover percentage, and these guards have quick hands that can force opponents into mistakes. However, Gonzaga’s size and experience will be too much for Baylor to overcome.