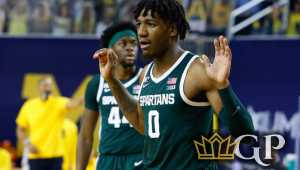 The Big 12 conference tournament gets underway on Wednesday with first round action in Kansas City and the Oklahoma Sooners are heavily favored against Iowa State. It was an ugly regular season for the Cyclones, as they went winless in Big 12 play. The Sooners pulled out a 10-point win the last time the teams met.

Iowa State has three players who dominate their scoring, as Jalen Coleman-Lands, Solomon Young and Javan Johnson combined to score almost half of the team’s points this season. The Cyclones are expected to get a boost, as Rasir Bolton is expected to play.

The Big Ten tournament continues on Thursday with second round action, as Michigan State takes on Maryland. The teams have identical records of 9-11 in the Big Ten but most people believe that Michigan State is in the NCAA Tournament, while Maryland may need to win this game to secure a spot.

These teams met a couple of weeks ago and Maryland rolled to a 73-55 win. It was an ugly shooting performance from the Spartans as they shot just 33.3 percent. Michigan State figures to be much better this time around and the Terps look like a team that could choke their way out of a tourney bid.

The Big 12 continues their tournament on Thursday with quarterfinal action in Kansas City, as the Oklahoma State Cowboys take on the West Virginia Mountaineers.  The teams split their two regular season meetings this season. Both teams are capable of putting up a lot of points so this could be another high scoring game.

West Virginia has a potent duo of Miles McBride and Derek Culver, while the Cowboys are led by Cade Cunningham and Kalib Boone. McBride has factored into almost half of all West Virginia’s made field goals in the last three games. The Mountaineers are unbeaten when holding opponents to 71 points or less but just 5-8 when opponents score more than 71 points. The Cowboys are 13-0 when holding opponents to 75 points or less.

Two teams trying to make a big run in the SEC Tournament meet on Thursday in the second round, as Mississippi State takes on Kentucky. These two met early in January and it was Kentucky getting a five-point win. It has been a disappointing season for Kentucky, but they do have some talented freshmen in Brandon Boston Jr., Isaiah Jackson and Devin Askew.

The Bulldogs are all about rebounding, as they led the SEC in offensive rebounding at 12.2 offensive boards per game. Kentucky is 0-12 this season when they score 67 points or fewer.

Some people may believe that Kentucky is capable of making a huge run in the SEC Tournament, but the reality is that this year’s Wildcats are simply not very good. Kentucky is too undisciplined to make a long run in the SEC tournament and they may struggle just to win this game. Mississippi State is the type of team that can frustrate the younger Wildcats.