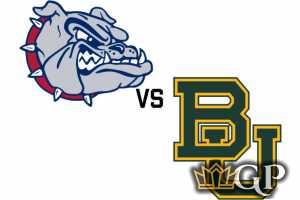 Two of the top teams in the country meet on Saturday on CBS, as the No. 2 Baylor Bears take on the No. 1 Gonzaga Bulldogs. Let’s look at this matchup for Saturday and college basketball picks.

Two of the top teams in the country meet on Saturday on CBS, as the No. 2 Baylor Bears take on the No. 1 Gonzaga Bulldogs. It could easily be a preview of the national title game in April, as both teams are loaded with talented players. The Bears feature one of the top backcourts in the country with Jared Butler and MaCio Teague, while Gonzaga has the trio of Corey Kispert, Joel Ayayi and Drew Timme.  Let’s look at this matchup for Saturday and college basketball picks.

This matchup of marquee teams takes place at 1 p.m. ET at Bankers Life Fieldhouse in downtown Indianapolis on Saturday. It could easily be a preview of the title game of the NCAA Tournament championship game which will take place at Lucas Oil Stadium in April. There is little doubt that early in the season, Gonzaga and Baylor are thought of as the two top teams in the country. Baylor or Gonzaga was the No. 1 ranked team in the AP poll for nine consecutive weeks last season.

Baylor has one of the top guards in the country in Jared Butler who is averaging over 18 points per game. He has an excellent backcourt mate in MaCio Teague who would be a star on many other teams. They are joined by Davion Mitchell and a top defensive player in Mark Vital. Baylor was extremely impressive in their first two wins, as they rolled over ULL and Washington.  Baylor had a tough matchup against Illinois scheduled for Wednesday.

On the other side, Gonzaga looked really good in wins over Kansas and Auburn. The Bulldogs look to be very explosive on offense. There is no denying the talent level of the Bulldogs, as Drew Timme is a top scorer and he is joined by Corey Kispert, Joel Ayayi and Jalen Suggs. The Bulldogs are going to roll through their conference this season and they have a chance to be ranked No. 1 throughout the season if they can get past the Bears on Saturday.

This series has been all Gonzaga in the past, as the Bulldogs have won all four previous meetings. The teams met in the 2019 NCAA Tournament and it was Gonzaga winning by a score of 83-71.

There is no question that Baylor and Gonzaga are two of the top teams in the country. You can already make a case that they are the two best teams. Neither one looks to have a major weakness. Each team has experience and they can both score a ton of points. It could come down to which team plays better defense. Baylor would appear to have more players who can play defense than Gonzaga. The Bulldogs are very tough to stop on offense but they didn’t impress me on defense against a young Kansas team and I don’t give them much credit for holding down Auburn. I think Baylor has the potential to be a good defensive team and we know they can score with anyone in the country. I have no doubt that the oddsmakers are going to favor Gonzaga in this one and I am not so sure the Bulldogs should be favored. I think Baylor could be the better team. I definitely give Baylor the edge in the backcourt and I think Vital is one of the better defensive players in the country. If he can make some defensive stops on Gonzaga’s key players in this game then Baylor has the edge. I think there will be some line value on Baylor in this one simply because Gonzaga is ranked No. 1 and they already beat Kansas. I will take the Bears plus the points.