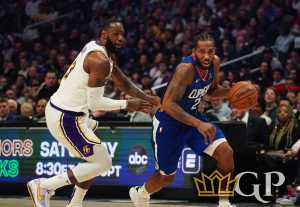 NBA betting odds are back on the board at online sportsbooks with two games locked in for Thursday, July 30. The second of which pits Kawhi Leonard and the Los Angeles Clippers up against LeBron James and the Los Angeles Lakers. Let's look at NBA picks.

It’s been 4+ long months since Rudy Gobert tested positive for the coronavirus and made himself look like an ass for licking and wiping the microphone in a press conference before bolting out of the media room. But with Adam Silver successfully pulling off a COVID-19 free bubble in Orlando, NBA betting odds are back on the board at online sportsbooks with two games locked in for Thursday, July 30. The second of which pits Kawhi Leonard and the Los Angeles Clippers up against LeBron James and the Los Angeles Lakers in a potential preview of the Western Conference Finals. the Clippers took two of three for the Lakers in the regular season, yet find themselves dogged on a neutral court with the betting public riding LBJ and “The Brow” in a big way.

The number to beat initially hit the board with the Lakers installed short 1-point favorites with the game total lined at 218.5. But with 72 percent of the bet count and upwards of 62 percent of the money, the Lakers now find themselves installed 4.5-point favorites. Even though it’s highly possible Patrick Beverley, Lou Williams and Montrezl Harrell could all miss this game due to a number of reasons, it’s surprising to see the betting public being so enthralled with the Lakers. LA has already more or less clinched the No. 1 seed in the West with it owning a 5.5-gamne lead and only eight games remaining in the regular season. It would hardly be a shock to see both teams treat this opener as no more than a dress rehearsal.

The action on the total makes much more sense. It hit the board at 218.5 but is now situated three points lower with 51 percent of the bets and north of 60 percent of the money in favor of the line move. This game has all the makings of a feel it out mentality with both squads attempting to adjust to their new surroundings. All three of these rivals’ skirmishes played to low scorers in the regular season, and points could once again be tough to come by in this one as well; even if a bulk of the Clippers defensive standouts won’t be on the hardwood.

LA invades Orlando owners of 44-20 SU and 35-29 ATS records. The under cashed at a 34-29-1 clip in those contests. In possession of the second-best road record in the NBA Pacific behind the Lakers at 19-13, the road shouldn’t faze them one bit. Last we saw the team in live action, they rattled off four straight wins and covers in the visitor’s role in defeating the Suns, Thunder, Rockets and Warriors by an average of 16 points per game; the under cashed in three of those skirmishes.

Far and away owners of the best record in the Western Conference, the Lakers invade Disney brimming with confidence installed the odds-on +216 favorites to win the NBA title. With that, it comes as no surprise to see them installed the +120 favorites to come out of the Western Conference finals and represent the West in the final series of the season. Just like tonight’s opponent, the Lakers have also been good to NBA bettors in logging a lucrative 35-27-1 tally against the closing NBA odds.

I wouldn’t blame you if you decided to lay the points with the Lakers even though it too has some injury concerns with Avery Bradley and Rajon Rondo out of commission for the foreseeable future. That said, it’s ultimately tough to buy into that considering the only time they defeated the Clippers this year was when the Clippers weren’t at full strength. Even so, I don’t envision myself getting involved with a side in this matchup. Instead, I’d recommend hitting the under now before the number to beat drops any further.

As already stated, neither of these teams have much of any motivation to go all-out and win this game. Each is pretty much locked into its playoff future, and both sides know another rendezvous is likely in store further along down the road in the playoffs. Why go all out to win this game and possibly lose more integral pieces to the puzzle due to injury? This has go through the motions written all over it. With that, I’ll be backing the under both in the first half and for the full game, and will gladly live be the under as well should both teams find a way to put points on the board early.