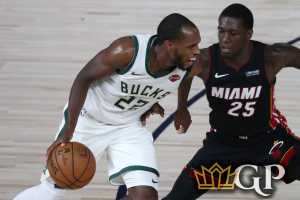 Can you say early season revenge game? The Milwaukee Bucks visit the Miami Heat on Tuesday night on TNT in a rematch of last season's Eastern Conference semifinals that the Heat won in five games. Let’s look at this matchup for Tuesday and NBA picks.

Can you say early season revenge game? The Milwaukee Bucks visit the Miami Heat on Tuesday night on TNT in a rematch of last season's Eastern Conference semifinals that the Heat won in five games. This matchup should have a lot of intensity and it won’t end on Tuesday night because the teams meet again in Miami on Wednesday night. Let’s look at this matchup for Tuesday and NBA picks.

This game has start time of 7:30 p.m. Eastern on Tuesday night and will be shown on TNT. The Heat will have the advantage in terms of rest, as they have not played since Friday, while the Bucks played the Knicks on Sunday. The Bucks were the top scoring team in the NBA before Sunday’s game against New York, as they were averaging nearly 130 per game. They were just 12th in defense, giving up 110.5 points per contest. They have been led early on in scoring by Khris Middleton who also leads the team in assists, but it won’t be long before Giannis Antetokounmpo takes over the scoring lead. He already leads the team in rebounds and field goal percentage. The Bucks lost their opener by one point to Boston and then they routed Golden State by 39 points in their second game.

Miami also comes into this game at 1-1. They lost their opener to Orlando but then righted the ship and routed New Orleans by 13 points on Friday. The Heat are only averaging 109 points per game through their first two games and giving up 105.5 points per contest. The early scoring leader for Miami is Bam Adebayo who also leads the team in rebounds. Goran Dragic is leading the team in assists at 8 per game. Dragic is already a leader in terms of the best sixth man in the NBA. He had 20 points and 7 assists in the opener and 18 points and 9 assists on Friday.

“I’m just happy that I’m healthy, that I’m back, that I can play basketball and just enjoy every moment,” Dragic said to the media, “I love this team. I love to play with those players, just enjoy it. That’s my motivation.” The other players on the team realize just how important Dragic is to their success. “Goran’s presence is huge for us,” said guard Duncan Robinson to the media, “He gets us organized. He’s never out of control. He knows where he needs to get. He knows where he can get on the floor. Just his presence out there, particularly offensively, just allows everyone else to just kind of calm down. And that veteran presence is hard to come by. And just the way he does it is the ultimate leader; you just feel calm when he’s out there on the floor.”

The Heat took out the Bucks last year in the Eastern Conference semifinals, winning 4-1 in the series. Only two of the five games were close and one of those was the win by Milwaukee.  It should be noted that all five of those games were played on a neutral floor. The last time the teams met in Miami it was the Heat winning 105-89. For some inexplicable reason, these teams rarely play close games. The series last season only had a couple of close games and going back farther we see just three close games in the last 10 meetings.

The Bucks will be wanting some revenge after getting eliminated by the Heat last season, but I don’t know how much revenge plays a part this early in the season. Miami is a really good team that is capable of beating Milwaukee again this season. This is strange spot for both teams because they will be playing in Miami again on Wednesday night. It is something you almost never see in the NBA, a back-to-back at the same site. The Heat have an extra day of rest and I expect that to come into play in at least one of these two games. I will take the Heat on Tuesday night and if they don’t win, I will come back and take them again on Wednesday.