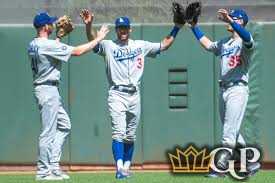 The Chicago Cubs and Los Angeles Dodgers will close out a pivotal extended series at offshore sportsbooks on ESPN Sunday Night Baseball when the teams close out their 2019 rivalry in front of the Tinseltown faithful.

The Chicago Cubs and Los Angeles Dodgers will close out a pivotal extended series at offshore sportsbooks on ESPN Sunday Night Baseball when the teams close out their 2019 rivalry in front of the Tinseltown faithful. Dave Roberts’ squad has been one of the best in the business at protecting its house with the club winning 25 of its 32 played games entering the series. On the flipside, Joe Maddon’s troops have been awful on the road in playing .438 ball to this point of the season. Making tonight’s bout all the more harrowing is the fact that Hyun-Jin Ryu is in the midst of an NL Cy Young Award type campaign and will be extremely tough to beat on his home bump where the lefty is undefeated through six starts; have fun with that Jose Quintana!

The Cubs batting lineup is loaded with a number of left-handed bats. From Kyle Schwarber to Anthony Rizzo to Jason Heyward, Maddon is going to have a tough time penciling in a lineup he’s confident can get the job done against one of the toughest southpaws the league has seen to date. Making matters worse is the fact that Chicago is batting a paltry .239 against left-handed pitching (No. 21). While it’s on-base and slugging percentages rank out amongst the best the league has to offer, Ryu is in a different class. He’s been tough on righties evidenced by a .213 BAA, but even more so against lefties in allowing a .183 batting average and a total of 15 hits and 4 ER through 82 AB. While he’s had issues with the Cubs lineup in the past, he’s simply been untouchable of late and will be the rightful heavy favorite at online sportsbooks in this matchup.

Jose Quintana – As a die-hard Cubs fan, it still makes me sick to think my team gave up Eloy Jimenez and Dylan Cease for the services of Quintana a few years back – to the White Sox of all teams! The Cubs lefty is nothing more than a No. 3 starter when at his best, but has looked more like a No. 4 of 5 too many times already this season. Making the prospects of winning his fifth game of the season is the fact that he’s been his absolute worst when pitching away from Wrigley Field. At home, the lefty checks in 3-3 with a 2.98 ERA and 1.15 WHIP. On the road, the ERA bloats up to 5.13 and WHIP to 1.53. Chicago has only managed two wins in his seven road starts even though it’s given him an average of 5.0 runs per game to work with. He was pretty rock solid against the Dodgers earlier this season after tossing seven innings of 2 ER ball to log the win. That start came at home; this one doesn’t.

Hyun-Jin Ryu – The South Korean has shown glimpses of dominance in the past, but the injury bug always seemed to derail a promising season. So far so good in 2019 with the lefty having 13 starts under his belt that’ve translated into a 9-1 record and 1.36 ERA. The southpaw’s stuff has been so good that he’s one of the frontrunners to capture this year’s NL Cy Young Award. Talk about being consistent! Only two of Ryu’s outings failed to qualify as quality starts – we’re talking 85 percent! And he’s been his absolute best at home where he’s won all six starts and conceded a grand total of 5 ER through just under 45 innings of work. The lefty has gone at least six innings in each of his last nine trips to the starting bump, and conceded a grand total of 3 ER over his last 50.2 innings pitched.

I have no faith in Quintana being able to rise to the occasion and not buckle under the pressure of this nationally televised matchup with the Dodgers. Even though Los Angeles much prefers stepping into the batter’s box against righties, it still owns a 13-9 record against lefties even though its own tallied an average of 4.0 runs per game against them. This simply just isn’t a good matchup for the Cubs who will likely already be worn out after taking hacks against Clayton Kershaw, Rich Hill and Walker Buehler in the previous three games. Ryu is simply in too good a groove to entertain the thought of getting in his way against a Cubs outfit that’s struggled on the road and had issues consistently getting the job done against left-handed pitchers. Add to the mix LA’s advantage in the bullpen should it be forced to somehow look to it early, and

I only have eyes for the host Dodgers at top rated sportsbooks in the series finale.