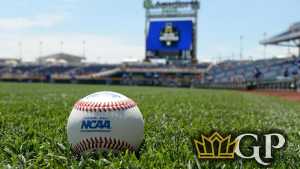 Having made a combined 33 appearances in the College World Series both the Arkansas Razorbacks and Florida State Seminoles are still looking for their first national championship.

Having made a combined 33 appearances in the College World Series both the Arkansas Razorbacks and Florida State Seminoles are still looking for their first national championship. The quest for that title starts on Saturday night as they battle each other in their first game of the 2019 College World Series. When the game is over one team will be feeling confident while the other will be one loss away from going home empty handed, again.

On paper, this should be a rather easy matchup—at least by College World Series standards—for Arkansas as the Seminoles have the lowest rank of any of the eight teams still standing. Despite that, FSU managed to upset Georgia in the regionals and LSU in the Super Regionals. They’re playing some quality baseball right now, having won six straight games.

The Razorbacks have the better winning percentage on the season and come into the NCAA tournament ranked No.5 nationally. Arkansas did suffer a disappointing loss in the middle game of the three-game set in the Super Regionals to Ole Miss, 13-5, but bounced back in a big way on Monday, winning 14-1 as the offense exploded.

Arkansas does boast a strong offense with a team batting average of .301. For comparison, the Seminoles’ have a team average of .272 and just three hitters total batting over the Razorbacks’ .301 team mark.

Heston Kjerstad hit one of two homers in the 14-1 win on Monday for Arkansas and now leads the team with 16 home runs. Casey Martin sits one behind at 15 while Trevor Ezell, Dominic Fletcher and Jack Kenley all have at last 10 homers this season.

Fletcher is an early rounder in this year’s MLB Draft as he likely finishes up his college career in this College World Series. He’s hitting .316 with a team high 59 RBI and has 23 doubles to go with 11 homers.

The draftee is one of five batters hitting over .315 with at least 190 at bats and his .382 OBP ranks fifth on the team amongst players with the same number of minimum at bats.

With a number of players able to go yard and just as many showing a good eye and ability to get on base, the Razorbacks have a number of ways they can score, particularly considering there’s some speed in the order as well.

FSU, meanwhile, is hitting .272 as a team with just two batters reaching double-digits in home runs: Drew Mendoza with 16 and J.C. Flowers with 13.

Mendoza tops the team in OBP at .484 to go along with those homers and has driven in a team high 56 runs. He, Robby Martin and Mike Salvatore make up the three previously mentioned players batting over .300 for the Seminoles. Salvatore leads the team at .341 and has 22 doubles, four triples, and seven homers to lead in extra base hits as well.

In the latter innings, both teams boast a strong closer. Matt Cronin is a strong option in the ninth for the Razorbacks and J.C. Flowers—who is more than just a bat with pop and some contact issues—has even better numbers at the end of the game for the Seminoles.

As is the case with most teams, the middle innings have some vulnerabilities, so the starters will need to go deep enough to minimize the exposure beyond the top guys like Jacob Kostyshock, Kevin Kopps, Chase Haney, and Conor Grady.

One of two Arkansas players drafted on the first day of the MLB Draft, the Razorback’s ace has had a great season, going 12-1 with a 2.26 ERA in 111.1 innings of work.

The senior right-hander will certainly want to pitch well in what could be his last start for Arkansas depending on how the team fairs.

Campbell has been dominant no matter how you look at it with 115 strikeouts to a meager 20 walks and has allowed just 82 hits, giving him a sub-1 WHIP and a .205 batting average against. What’s more impressive is how many of those hits are just singles. He’s allowed only five home runs all season which is key against a team like FSU with a lower batting average and higher dependency on the longball.

Florida State has few other options as strong as Van Eyk to start this first game in the College World Series. Drew Parrish and Shane Drohan are clear steps down.

Van Eyk has thrown a team high 94.2 innings, posting a 3.80 ERA and 10-3 win/loss record. His numbers don’t quite matchup to Campbell’s, but his strikeout rate is higher with 120 strikeouts. His stuff is filthy, but his control isn’t quite as locked in. He’s walked just 39 but has a higher batting average against at .227 while hitting seven batters and allowing six wild pitches.

By most measures, he’s not quite as good as Campbell, but he’s the closes FSU gets and has the stuff to be dominant anytime he takes the ball. He’s just a bit less of a given compared to Campbell.

Look for a good pitching duel early and with a couple of the better closers in college baseball waiting on the back end, this game will need to be decided before the ninth.

Count on Campbell to outduel Van Eyk and for the Arkansas offense to find a way to scratch across a few early runs, riding that to a win.

FSU’s offense is a bit too dependent on the longball and Campbell doesn’t allow many homers. Look for that to help stifle the Seminoles’ bats enough to get Arkansas the win.

Meanwhile, count on the Razorback’s ability to get on base to allow them to build a mid-game rally that’ll be key to their victory.

Take the Razorbacks over the Seminoles in this Saturday night showdown.