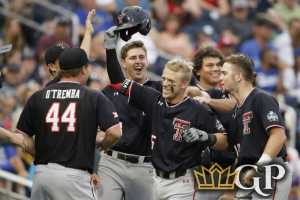 The Louisville Cardinals overcame a rough start in the Regionals to advance and then dominant in the Super Regionals.

Both the Cardinals and Commodores have already been tested during this tournament. Now that both have reached the College World Series, each will be tested in their first game here in Omaha. Both teams have experience in the College World Series though the edge there goes to Vanderbilt, the favorite at this point and only team still standing with a title in the last 56 years, their coming in 2014.

Can Louisville fair better here in Omaha than the program has in recent seasons? Sunday is the first step for both teams.

J.J. Bleday was selected fourth overall in the MLB First Year Player draft and is the top draft pick still playing in the College World Series.

The lefty hitting outfielder leads the Commodores offense with 26 home runs and forms an extremely strong top of the order behind third baseman Austin Martin.

Martin hit a key home run in the deciding game of the Super Regionals and has some power, but he’s also an excellent table setter for Bleday as Martin is batting .410 with a .503 OBP and brings speed with 18 steals.

After Martin, Bleday has the next best average on the team at .350 and has a .464 OBP and .717 slugging percentage thanks to those 26 dingers.

Behind Bleday, the lineup remains stacked. Stephan Scott has a .339 average and a dozen homers. Ethan Paul leads the team in RBIs.

The top nine hitters for Vanderbilt all have an OBP north of .340 and at least 36 RBI as anyone on the roster can do damage. After all, the team has a .318 average and 93 bombs on the year.

The Louisville offense cannot match up to those numbers—at least not in the regular season—but in seven games so far in this tournament, the team has a .320 average. They also just scored 26—while letting up just one—in a quick Super Regionals sweep of a strong East Carolina team.

The Cardinals are scoring more than seven and a half runs per game. Logan Wyatt is a big part of that with a great batting eye and some solid power. Alex Binelas and Tyler Fitzgerald are other strong options.

One area that Louisville may trump Vanderbilt is speed as they have four players with at least 13 steals on the year.

On the mound, the starters for both teams are strong and we’ll break that down in a moment, but the bullpens are also worth discussing.

After a plethora of strong starters, Vanderbilt has Tyler Brown in the closer’s role. With 58 strikeouts and just eight walks in 41.2 innings, he’s shown strong command and excellent stuff. He does have a 2.59 ERA but is not prone to the home run with just one allowed. With 14 saves, he’s a rather lockdown option in the ninth, but so is Michael McAvene for Louisville.

The Cardinal closer has thrown 30.1 innings with a .160 opponent batting average. He does walk a bit more and allow homers at a slightly higher rate than Brown, but both are excellent options in the ninth.

Leading up to them, the Commodores have a bit more depth, including guys able to give length, but it’s hard to argue with a guy like Michael Kirian for Louisville and his 1.13 ERA.

The starting options for the Commodores are plentiful. Drake Fellows pitched the bulk of the innings this season, but was rocked by Duke in the Super Regionals, allowing seven runs in four innings.

Still, he’s 12-1 this year with 104 innings pitched. His 4.15 ERA isn’t glamorous, but it’s good enough given the strong bullpen and plentiful run support from one of the best offenses in baseball.

We’ll see if he gets the ball as he can be a bit wild. Kumar Rocker or Mason Hickman may be the option instead.

Rocker, after all, tossed a no-hitter with 19 strikeouts against the same Blue Devil squad in the Super Regionals though he threw a ton of pitches and may not be a full strength on Sunday. Hickman only went four innings with fellow starter Patrick Raby following him up with two.

Regardless of who takes the ball, Vanderbilt has several quality options with the ability to have a short leash and another starter quality arm behind him if needed, in case of a short outing.

Reid Detmers figures to get the ball for the Cardinals as the team’s clear ace.

The southpaw earned ACC Pitcher of the Year honors after going 12-4 with a 2.85 ERA and a staggering 162 strikeouts in 107.1 innings of work. When his stuff is working, he’s basically unhittable.

The strikeouts are a program record and rank second in college baseball this season. With so much swing and miss, he’s been able to hold the opposition to meager .178 batting average against. He has given up 11 home runs and 27 walks which aren’t staggering numbers, but Vanderbilt does have a lot of patient hitters and plenty of power.

Detmers has seven hit by pitches this year showing he can get a bit wild from time-to-time, too, but ultimately the lefty is a tough test even for a stacked Vanderbilt offense.

The Commodores have the deeper roster all around compared to Louisville and have seemingly had a fire lit under them after their Super Regional opening loss.

Detmers and McAvene offer a strong tandem for the Vanderbilt offense to contend but count on the Commodores to find a way to get to Detmers and put a few on the board. The lefty, after all, has allowed some walks and some homers this season.

Martin and Bleday will lead the way for an offense that can score runs in a number of ways up-and-down the lineup.

Take the Vanderbilt to show why they’re the tournament favorites in their College World Series opener against Louisville.