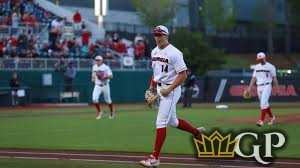 The SEC is a powerhouse baseball conference so it’s no surprise it would be well represented in the College World Series with two of its own matching up as the last two teams to take the field in Omaha.

The SEC is a powerhouse baseball conference so it’s no surprise it would be well represented in the College World Series with two of its own matching up as the last two teams to take the field in Omaha.

To that end, the Mississippi State Bulldogs and Auburn Tigers are set to meet up on the diamond on Sunday night. The Bulldogs took two of three from the Tigers in a series earlier this season and are the favorites again in this one, but the Auburn managed to steal the first game of their head-to-head series back in March and could do so again.

The Tigers come into the College World Series having already notched a couple big upsets in the Regionals and Super Regionals, but can they do so again as the stage gets even bigger?

Despite the showing in the Super Regionals against UNC, offense remains the question for the Tigers. Not a single player has an average above .300 yet the team scored 25 runs in their two wins over the Tar Heels in Chapel Hill.

The bats found a way to get it done, but can they do so again? Outfielder Steven Williams was instrumental in them progression beyond the Regionals while first baseman Rankin Woley and third baseman Edouard Julien each had a pair of three hit games against UNC. Julien and Williams each went deep in one game, but the high run total came more from big, sustained rallies than the long ball.

Interesting of note, despite the pair of big offensive performances, in the Super Regionals, the third game of that round for Auburn ended in a 2-0 shutout loss.

Overall, some offensive regression seems likely for the Tigers in Sunday’s game given the .265 team average and rather pedestrian power numbers. In fact, Auburn has allowed more homers on the year than its hit. That could prove troublesome against Mississippi State.

The Bulldogs have hit 15 more home runs this season than the Tigers with Justin Foscue and Dustin Skelton leading the way with 24 combined between them. As a team, Mississippi State has a .317 average, well above the highest average of any Tigers, and every single player with at least 50 at bats on the team has an average higher than over .280.

Jake Mangum is the catalyst for the offense. The speedy leadoff many offers a bit of doubles power to go with a .355 average and 22 steals. With 103 hits on the season, he’s the spark. He cooled way down late in the season but seems to have found his spark again which is bad news for Auburn.

Beyond the offense, Mississippi State is a very balanced team. They’ve got a first-round talent in their starting rotation and a bullpen with some quality swing and miss including Colby White and Cole Gordon with a combined 112 strikeouts in 66.1 innings.

Much like the offense, Auburn doesn’t quite matchup with Mississippi State in the pen either. They have some arms, but not much swing and miss compared to the Bulldogs. Overall, the team has a 4.49 ERA compared to a 3.47 mark for the Bulldogs.

The senior southpaw has a respectable walk rate of close to two and a half free passes per nine innings and is holding the opposition to a .164 batting average against with just 21 extra base hits allowed. Meanwhile, he’s struck out 168 batters.

He started the opener against Stanford in the Super Regionals and went six innings, giving up just one unearned run on five hits and a pair of walks while striking out eight, but did have to throw 117 pitches.

In a start against Auburn this year, Small went six innings, allowing two runs in a no decision. The Tigers, however, did eventually win that game.

Burns is the only Auburn arm that’s yet to make a relief appearance. He leads the team in innings pitched so it stands to reason he’ll get the nod.

He’s the only big-time strikeout arm on the Auburn staff with 100 Ks in his 79 frames and he’s been rather judicious with both the walks and home runs, walking 21 and giving up six long balls, fewer than one per nine.

Burns has been going through some shoulder issues and took the ball in Game 3 so even with him likely to start, look for a short outing like his two-inning stint against UNC.

Auburn has impressed to even get to the College World Series with wins over Georgia Tech and North Carolina, but there are still questions about the offense being able to sustain its strong play.

With Mississippi State already beating Auburn in two of three earlier this year, we’ve gotten a glimpse of how these two teams stack up.

Look for the Tigers to put up a fight, but the offense could very well go silent against Small tonight as it did in the middle game of the Super Regionals. The Tigers may find a way to scratch across a few runs but look for the Bulldogs offense to take care of business, grabbing an early lead and allowing Small and the bullpen to pitch aggressively and hold the lead.

Take the Bulldogs over the Tigers in this Sunday showdown.