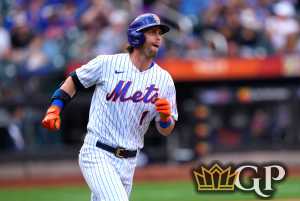 Baseball picks for this weekend are ready to roll with MLB picks for Saturday, September 3 and Sunday, September 4. Let’s look at weekend MLB picks including the Sunday Night Baseball game between the Padres and Dodgers on ESPN.

The Rangers visit the Red Sox on Saturday and based on the pitching matchup it should be a high scoring game. The Rangers are expected to send Kohei Arihara to the mound, while the Red Sox counter with Brayan Bello. Arihara is 1-2 with an ERA over five on the season, while Bello has really struggled with an 0-4 mark and an ERA of more than seven. We’ll go with the Rangers and Red Sox over the total on Saturday afternoon.

I don’t play run lines that often but I will make an exception on Saturday in the game between the Nationals and Mets. Washington is expected to go with Paolo Espino who is 0-6 with a 4.35 ERA, while the Mets send Max Scherzer. We know that Scherzer is having another excellent season, as he is 9-4 with a 2.27 ERA. This game shouldn’t be close, so I will play the Mets on the run line.

What has happened to Madison Bumgarner?  He has been awful this season for the Diamondbacks and comes into Saturday’s game against the Brewers with a 6-13 record and an ERA of nearly five.  Corbin Burnes is expected to get the start for Milwaukee and he is 9-6 with a 3.01 ERA. I’ll take the Brewers to get the road win.

Have you noticed what Brady Singer has done for the Royals this season? He comes into Sunday’s game at Detroit with a 7-4 record and a 3.33 ERA. Those are really good numbers on a Kansas City team that has struggled for much of the season. The Tigers are expected to send Matt Manning to the mound and he has been pretty good for Detroit with a 1-2 record and a 3.79 ERA. I’ll go under the total with the Royals and Tigers on Sunday.

It should be a good pitching matchup on Sunday between the Phillies and the Giants. Philadelphia is set to send Ranger Suarez to the mound while the Giants go with Carlos Rodon. Suarez is 8-5 with a 3.42 ERA and he has been even better on the road with a 6-1 mark and a 2.54 ERA. Rodon is 12-7 with a 3.03 ERA and at home he is 6-2 with a 2.42 ERA. I’ll go under the total with the Phillies and Giants.

The Sunday night game on ESPN has the Padres visiting the Dodgers and it should be Mike Clevinger going against Andrew Heaney. The Padres are trying to hold off the Brewers for the last Wild Card spot in the National League, while the Dodgers have the best record in baseball. Clevinger comes into this game at 5-5 with a 3.59 ERA. He has been pretty consistent, going about 5 innings and allowing two or three runs.  Heaney is 2-1 with a 2.12 ERA. Heaney wasn’t that great last time out but made it through five innings and allowed seven hits and three runs to the Mets. Heaney faced the Padres in early August and wasn’t that great, as he went 4.2 innings and gave up four hits and three runs. It just so happened that the opposing pitcher in that game was Clevinger and he didn’t pitch well, going 4.2 innings and giving up 7 hits and five runs. I have no faith in either Clevinger or Heaney so I will go over the total on Sunday night.