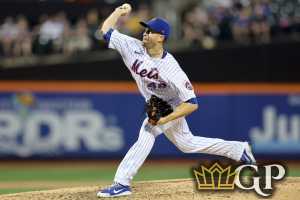 Baseball picks for this weekend are ready to roll with MLB picks for Saturday, September 24 and Sunday, September 25. I am sizzling hot with the plays of late, as I was 5-1 two weeks ago and 5-1 again last weekend. Let’s look at weekend MLB picks.

The Mets visit the A’s on Saturday in a matinee and it should be Jacob deGrom getting the ball for New York. He is 5-2 with a 2.32 ERA this season. The Mets need to win every game against weaker opposition if they expect to hold off the Braves for the National League East title. This is simply a game they can’t afford to lose with their ace on the mound. I will lay the price and take the Mets to get the road win.

The Marlins host the Nationals on Saturday and it should be Sandy Alcantara on the mound for the fish. He has been one of the best pitchers in the league this season and one I have on him quite often. He is 13-8 on the season with a 2.37 ERA. He is the leader in the NL Cy Young race and I think another good start would cement him into getting the award. This is definitely a good spot against a bad Washington team. I’ll take the Marlins with Alcantara on the mound.

The Mariners visit the Royals on Saturday night and it should be Logan Gilbert getting the ball for Seattle. The Mariners offense has gone missing of late, but they should be able to get things going against a bad Kansas City pitching staff. Gilbert is 8-1 on the road this season with an ERA under three. If he gets the ball as expected on Saturday, I’ll back the Mariners.

The Cardinals visit the Dodgers on Sunday afternoon and it should be Tyler Anderson getting the ball for Los Angeles. Anderson is one of the most overlooked and underrated pitchers in the league this season. All he does is win games and yet he is never mentioned in the Cy Young race. He is 15-4 with a 2.52 ERA. His ERA is actually not that much higher than that of Alcantara and he has a lot more wins since he plays for a better team. Anderson is 8-1 at home this season with an ERA just above two. The Dodgers are a good play in almost any situation, and with Anderson on the mound they have the advantage over anyone that the Cardinals throw. I’ll take the Dodgers to get the home win in this Saturday matinee.

The Sunday Night Baseball game on ESPN this week has the Red Sox visiting the Yankees.  There is no question that the Red Sox-Yankees rivalry is a great one, but I think ESPN could have picked a different game considering the Red Sox have been out of the race for a long time. The matchup between the Cardinals and Dodgers looks to be more important and a better one. Regardless, it will be Boston vs. New York on Sunday night. The Red Sox are expected to go with Brayan Bello, while the Yankees send Nestor Cortes. There has not been much to like about Bello, as he is 2-6 with a 4.75 ERA. Cortes has been solid all season for the Yankees, as he is 10-4 with a 2.67 ERA. It is Gerrit Cole who gets all the press as the Yankees top starter, but Cortes has been the true ace of the staff this season for New York. This looks to be a mismatch on Sunday night, so I will take the Yankees to get the home win.