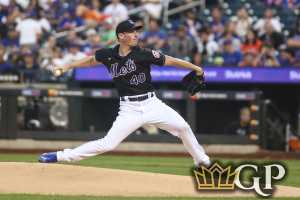 The Pirates visit the Mets on Saturday night and every game is of critical importance to New York as they try and win the National League East. One of their best pitchers has been Chris Bassitt and he should get the ball in this game. He is 13-8 with a 3.44 ERA. I know he is coming off a poor outing against the Cubs but his previous start was against Pittsburgh and he went seven innings and gave up just five hits and one run. I expect a similar performance on Saturday, so I will take the Mets in this one.

Two pitchers I have backed a lot this season are expected to collide on Saturday night, as the Padres visit the Diamondbacks. Joe Musgrove gets the ball for San Diego, while Zac Gallen goes for Arizona. Both have been excellent this season, as Musgrove is 9-7 with a 3.28 ERA, while Gallen is 12-2 with a 2.50 ERA. I know we’ll get a low total, but I don’t see either lineup doing much against these two starters. I will go under the total with San Diego and Arizona on Saturday.

Another low scoring matchup should be on tap for Saturday night, as the Mariners visit the Angels. The probable pitching matchup has George Kirby going for Seattle, while Los Angeles sends Shohei Ohtani. Kirby is 7-3 with a 2.98 ERA for Seattle, while Ohtani is 12-8 with a 2.55 ERA. I’ll go under the total with the Mariners and Angels on Saturday night.

The Rangers visit the Rays on Sunday and it should be Jeffrey Springs getting the start for Tampa Bay. He has been one of those under the radar pitchers that has been very good this season. He comes into this game at 8-4 with a 2.41 ERA. The Rays can’t afford to be losing games against teams they should beat and this looks like a really good spot for Tampa on Sunday with Springs on the mound. I’ll take the Rays in this one.

The Cardinals definitely got the better of the trade with the Yankees when they acquired Jordan Montgomery. He has been a huge boost to the St. Louis rotation and he should be getting the ball on Sunday at home against Cincinnati. There is not much reason to back the Reds in any game and definitely not on the road going against Montgomery. He is 8-3 with a 3.08 ERA. He is coming off a poor start against the Brewers, but I expect him to bounce back in a big way on Sunday. I’ll take St. Louis in this contest.

The Sunday Night Baseball game on ESPN this week has the Dodgers visiting the Giants. The Dodgers have already clinched the National League West while the Giants have been out of contention for some time. There is always the risk that the Dodgers will start resting players, but it seems unlikely they will do so in this game since it is in prime time. The probable pitching matchup has Andrew Heaney going for Los Angeles, while San Francisco sends Alex Cobb. Heaney has been solid for the Dodgers and his overall numbers have him at 3-2 with a 2.84 ERA. Cobb has been up and down with a 6-6 record and a 3.48 ERA. The Dodgers are simply the better team and they have the better pitcher on the mound. I will take Los Angeles on Sunday night.