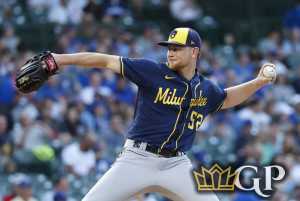 It has been all or nothing for Hunter Greene this season for the Reds, as he is either great or awful. He was great last time out against Arizona so he is due to be awful on Saturday. The Reds visit the Cardinals and Adam Wainwright on Saturday. We know that Wainwright will keep the Cardinals in the game because he does that in almost every game. St. Louis is the far better team and they have the edge on the mound. I’ll take the Cardinals in this game.

The Brewers visit the Nationals on Saturday and the probable pitching matchup has Eric Lauer going against Patrick Corbin. Lauer has been solid all season for the Brewers, as he comes into this game with a 5-1 record and a 2.38 ERA. Corbin has been awful for the Nationals all season and although he did get a win last time out, he still didn’t pitch that well, as he gave up three runs and nine hits in six innings. I don’t think he has turned the corner at all. I will take the Brewers in this one.

The Blue Jays visit the Tigers on Saturday with Kevin Gausman expected to go for Toronto, while Detroit sends Beau Brieske. Gausman has been good this season for Toronto with an ERA of less than three but he is just 5-4. Brieske has struggled all season for the Tigers, as he comes into this game with an 0-5 record and an ERA of nearly five. I expect that the Blue Jays will put up a lot of runs on Saturday, so I will lay the price and take Toronto.

It should be a high scoring game on Sunday, as the Orioles visit the Royals. The Orioles are expected to give Dean Kremer another start. He went 4.1 innings last time out and gave up five hits and three runs to the Indians. It is hard to see it getting much better on the road against the Royals. Kansas City is expected to send Brad Keller to the mound. He is 1-7 on the road with an ERA of more than four. I’ll go over the total with the Orioles and Royals.

Do the Rangers regret all the money they gave Jon Gray in the offseason? Gray has done next to nothing this season for the Rangers and comes into this game with a 1-3 record and a 5.28 ERA. Texas was hoping that Gray would be their top starter, but so far he has been a bust. The Rangers visit the White Sox on Sunday and Chicago is expected to send Michael Kopech. He is 2-2 this season with an ERA of less than two. I’ll lay the price and take Chicago in this one.

The Red Sox visit the Mariners on Sunday afternoon and the probable pitching matchup has Garrett Whitlock going against Robbie Ray. Whitlock has been awful on the road of late and he figures to struggle against the Mariners. On the other side, the Mariners should be worried about the boatload of money they gave to Ray. He has been giving up runs on a regular basis all season. He comes into this game with an ERA of nearly five. I’ll go over the total with the Red Sox and Mariners.