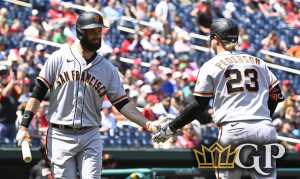 We head into the month of May this weekend with a full slate of action including two games on FS1 on Saturday and the normal ESPN Sunday Night Baseball game. Let’s look at weekend MLB picks for Saturday, April 30 and Sunday, May 1.

We head into the month of May this weekend with a full slate of action including two games on FS1 on Saturday and the normal ESPN Sunday Night Baseball game. The two nationally televised games on Saturday on FS1 have the Los Angeles Angels at the Chicago White Sox in a matinee and the Philadelphia Phillies at the New York Mets at night. The Phillies and Mets also get the spotlight on Sunday night, as ESPN will be televising the game. We bounced back with a solid 4-2 record last weekend with six picks. Let’s look at weekend MLB picks for Saturday, April 30 and Sunday, May 1.

One of the afternoon games on Saturday has the Washington Nationals at the San Francisco Giants. One of the top pitchers in MLB is Logan Webb and he should be getting the start for the Giants on Saturday. He is 2-1 on the season with an ERA just under three and he has been almost unhittable at home with a 1-0 record and a 1.29 ERA. The Giants are normally very tough at home and with Webb on the mound they are a solid choice against the Nationals on Saturday.

Another matinee on Saturday has the Minnesota Twins visiting the Tampa Bay Rays. The Twins are expected to send Chris Archer while the Rays go with Shane McClanahan. I don’t really get what the Twins see in Archer as I don’t know that he is a quality starter, while McClanahan is a very reliable arm for the Rays. McClanahan is 1-1 this season with an ERA of less than three and I expect another good outing from him on Saturday. I will take the Rays at home in this one on Saturday.

The Yankees visit the Royals on Saturday night and the probable pitching matchup definitely favors New York. The Yankees are expected to go with Gerrit Cole, while the Royals send Carlos Hernandez. Cole is one of the top pitchers in the league, while Hernandez is struggling for Kansas City. This looks like a mismatch, so I will lay the price and take the Yankees on Saturday.

The first game we’ll look at on Sunday has the Seattle Mariners visiting the Miami Marlins. The probable pitching matchup has Logan Gilbert going for the Mariners, while the Marlins send Sandy Alcantara.  This has all the looks of a low scoring game, as Gilbert has been excellent for the Mariners this season with a 3-0 record and a 0.40 ERA, while Alcantara comes into this one with a 2-0 record and a 1.78 ERA. This should be a game where runs are tough to come by, so I will go under the total on Sunday.

The Chicago Cubs visit the Milwaukee Brewers on Sunday and the probable pitching matchup has Marcus Stroman going up against Corbin Burnes. I am not high on Stroman at all and he has looked awful so far, going 0-3 with a 6.98 ERA. On the other side, Burnes has picked up right where he left off last season and has a 1-0 record with a 1.75 ERA. I will lay the price and take the Brewers in this Sunday afternoon contest.

The Cincinnati Reds visit the Colorado Rockies on Sunday in what could be a high scoring game. The probable pitching matchup has Reiver Sanmartin going for the Reds, while the Rockies send Kyle Freeland. It has been ugly for both pitchers so far this season, as Sanmartin is 0-3 with an ERA of 10.91, while Freeland is 0-3 with an ERA of 6.16.  I think you can feel confident of getting at least a split with a good chance of a sweep if you take the Rockies and the game over the total. The Rockies are going to score their share of runs on Sunday and if the Reds get some off Freeland this should be a high scoring game. I’ll go with Colorado and the game over the total on Sunday.