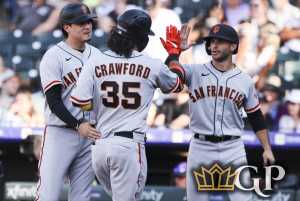 The Weekend MLB Best Bets swept the board last time out moving us to 98-54 overall and up a good chunk of change for the season. Hopefully we can close the regular season out on a high and continue adding to the bankroll.

It’s been a forgettable end of season run for young fireballer Triston McKenzie whose been lit up for 14 hits (3 HR) and 10 ER over his last two starts against the division rival Royals and White Sox. However, each of those teams had already seen his stuff multiple times this season. They were due to get him. That’s not the case with the AL West bottom feeding Texas Rangers who’ve yet to step up to the plate and stare back at the right-hander. With that, I’m expecting McKenzie to close his respective 2021 campaign out with a bang. Cleveland is gunning to finish the regular season at or above .500, and gets an excellent opportunity to do so through the weekend. They should tee off on Spencer Howard! Bet the Tribe and hit the over of McKenzie’s K prop.

I’ve got no clue who will be going for either of these teams. What I do know is that I won’t pass up on another opportunity to fade the joke that’s turned into the 2021 San Diego Padres. Besides the Mets, is there a more disappointing team in the league right now? Fernando Tatis Jr. has a lot of growing up to do. Same goes for Manny Machado! It’s a disgrace that this team won’t be in the playoffs. On the flipside, the Giants need to continue fending off the Dodgers if they’re to win the NL West pennant. Look for them to do so by guaranteeing San Diego wraps the season with a sub .500 record after going into it one of the favs to win the division.

If you’ve followed along with me all season, you know I’m a huge fan of Josiah Gray. I can’t wait to reinsert him into my fantasy lineup next season. Regardless, the youngster has fallen upon hard times of late having allowed 23 hits (5 HR) and 21 ER in his five made September starts. Though Boston is fighting tooth and nail with Seattle for one of two available Wild Card spots, I’m expecting the youngster to rise to the occasion in his final 2021 start and make life a living hell for the Red Sox. I won’t call for the outright win in this spot, but will instead look to Gray’s K prop and hope it’s suppressed due to his recent poor performances. Should it come out in the 5 to 5.5 range, it’s hammer time!

What a joke the Halos are! Now granted, Mike Trout was absent a bulk of the year but the soon to be named AL MVP is still playing right? Even so, I’m all over the Mariners in this spot and recommend you do the same. Heck, back them in every game of this series! In winning nine of their last 10 games, the M’s are now the absolute best bet in all of baseball having reeled in north of $3700 for MLB bettors overall. The team is still in a position to steal a Wild Card bid over the weekend should things fall their way. Mitch Haniger is in the midst of an unbelievable September heater and his bat deserves to be swung in the postseason. If the number to beat is too chalky, back the Mariners on the -1 run-line instead. They’re going to make the Halos their biatch through Sunday – Slam Your Man!