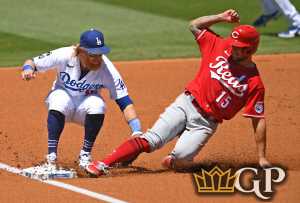 The Weekend MLB Best Bets ended up churning out a 3-2 overall record that brought back a little bit of profit. My Best Bets now stand 93-54 overall as the regular season comes to a close. Let's look at this weekend's MLB Best Bets.

The Weekend MLB Best Bets ended up churning out a 3-2 overall record that brought back a little bit of profit. It just as easily could’ve been a 4-1 showing had the Padres/Dodgers game not gone over by half a run on Sunday. The F5 Under cashed with ease, but LA’s offense went HAM taking advantage of the Friars bullpen in the seventh and eighth innings to win 8-0 and force me to rip up what looked to be a golden Under 7.5 ticket. Truthfully, we were lucky to even be in a position to cash the first five after Blake Snell was removed in the first inning due to injury. We press on. My Best Bets now stand 93-54 overall as the regular season comes to a close. Here’s a couple more suggestions should you care while engrossed taking in college and NFL football through the weekend.

The Reds fall from grace has been tough to watch. Even so, it still only finds itself 1.5-games in back of the Cardinals for the second Wild Card slot. Regardless, I’ll be fading Sonny Gray in this spot with him set to run up against the immovable force otherwise known as Max Scherzer and the Los Angeles Dodgers. Mad Max is yet to allow more than 2 ER in any of the eight made starts for the defending champs since coming over from Washington. He hasn’t allowed a single earned run in any of his last four and racked up a godly 41:1 K/BB ratio during that stretch. Gray’s been hell-a decent of late as well in allowing 6 ER over his last three starts (17 IP), but Cincy lost each game because they stink. Look for more of the same to play out in the finale.

If you remember a month or so ago, I relayed that I bet the Padres to miss the playoffs. Back then, they were clinging to a 1.5-game lead in the Wild Card race. Fast forward to this weekend, and the Friars are now out of the mix sitting one-game in back of the Redbirds. That deficit could’ve swelled by the time Yu Darvish squares off against Adam Wainwright after pinning their hopes and dreams to the newly acquired Vince Velasquez for Friday’s series opener. Darvish has been a huge disappointment since San Diego traded for him with the Cubs in the offseason. Only one of his last five starts has been of quality. As for Waino, he continues to drink from the Fountain of Youth and has been lights out at home where he’s the owner of a 2.71 ERA, 0.97 WHIP and .214 BAA. It’s only going to continue getting worse for the Padres; might as well make some money off it!

The Royals got me last Sunday in becoming the first team to get to Bailey Ober ultimately snapping Minnesota’s three-game win streak with him toeing the bump. I’m going right back to the well with Jackson Kowar and his bloated 11.50 ERA and 2.17 WHIP toeing the bump for the home team. It’s been an up and down campaign for Logan Gilbert in his first full taste of Big League hitting. However, the righty looks to have fallen back in a groove since KC blasted him for nine hits (1 HR) and 5 ER through four innings at the end of August. Since then, Gilbert has conceded 15 hits (2 HR) and only 4 ER over his last 16.1 innings against the Astros and Red Sox. I expect him to avenge that outing and keep the M’s in the thick of the AL Wild Card race.

The A’s have thoroughly enjoyed beating the ever-living tar out of the division rival Halos all season in taking 12 of the 16 meetings heading into Friday’s series opener in the Big A. Montas is set to square off against Barria in the finale. He’ll be looking to bounce back from a poor showing earlier in the week after getting tagged by the Royals for eight hits (1 HR) and 4 ER through only 3.1 innings. The effort stands as his shortest since August 16 when the White Sox roughed him up. Through three 2021 starts against the Angels, the righty stands 2-1 with a 0.92 ERA, 0.97 WHIP and .192 BAA. He’s tallied 25 K to just 5 BB and looks to be in line for his 18th quality start through 30 overall tries. Hammer the A’s and the Over of his K prop – Slam Your Man!