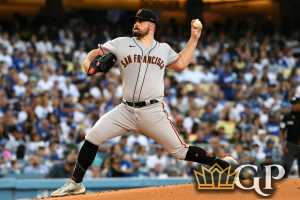 The Chicago Cubs visit the San Francisco Giants on Sunday Night Baseball on ESPN. It is an interesting matchup, as the Cubs have been poor for much of the season but are suddenly playing much better, while the Giants were in good shape in the Wild Card race before completely going into the tank.  The probable pitching matchup has Adrian Sampson going for Chicago, while San Francisco sends Carlos Rodon. Sampson seems to have turned his career around this season, as he has pitched well for Chicago and has an ERA just above three. Rodon was supposed to be the ace for the Giants and although his overall ERA is solid, his record is just 8-6 and he has been up and down of late. It looked like we had a sure winner last week until disaster struck late with the Padres and Mets going over. Let’s look at Sunday night baseball picks.

Sampson is 0-1 on the season with a 3.20 ERA. He has yet to get a decision on the road and has an ERA of 2.53. Sampson has allowed three runs or less in each of his last five starts. Rodon comes into this game with an 8-6 record and a 3.18 ERA. He 4-1 at home with a 2.05 ERA. Rodon has faced the Cubs four times in his career and his teams split those four games with three of the four going under the total.

This is an interesting contrast in a number of different ways on Sunday night. The Giants are the better team, but heading into this series the Cubs were playing really well, while the Giants were struggling. Chicago is completely out of playoff contention and will probably unload some players at the trading deadline. The question is what will the Giants do? They have no shot at the division, as the Dodgers are running away with the NL West. Do the Giants really want to add to a team that is below .500?  It is true that the Giants are still very much in Wild Card contention, but they don’t have the look of a team that can win in the playoffs.

The matchup between Sampson and Rodon is also interesting, as Sampson has looked really good of late, while Rodon has been up and down. This should be a good spot for the Giants to get the home win, but the price is going to be high. I definitely don’t want to be laying 2-1 on a San Francisco team that is not playing well going against a pitcher in Sampson who is pitching well.

The total looks to be the way to go in this one, as Sampson has pitched well for most of this season and Rodon has been really good at home. I’ll go under the total with the Sunday Night game between the Cubs and Giants.