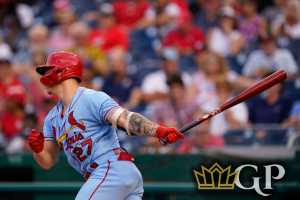 The New York Yankees visit the St. Louis Cardinals on Saturday Night Baseball on FOX. It is a matchup between one of the best teams in baseball, the Yankees, and a team in the Cardinals that is very much in the playoff race in the National League. The probable pitching matchup has Domingo German going for New York, while St. Louis sends Jordan Montgomery. German is still getting his feet under him after spending much of the season on the injured list, while Montgomery will be facing his former team, as the Yankees traded him earlier this week to the Cardinals for Harrison Bader. We had an easy winner last week with the Cubs and Giants going under. Let’s look at Saturday night baseball picks.

The Yankees were 29-21 in their first 50 road games with 26 going over the total, 23 going under, with one push. They are averaging 5.3 runs per game which is best in the league. They are giving up just 3.25 runs per game which is 3rd in the league. Aaron Judge leads the team in home runs with 43, while Jameson Taillon leads the team in wins with 10.

German is 1-1 on the season with a 6.39 ERA. He is 0-1 on the road with an ERA of more than eight. The Yankees still believe in German but he has not pitched well since coming off the injured list. He was a little better last time out, as he went five innings against Seattle and gave up just two runs. This will be his first career start against the Cardinals. Montgomery is 3-3 with a 3.69 ERA this season. He is 2-0 at home with a 3.72 ERA. He will be facing his former team, so this will be an interesting start for Montgomery.

The Yankees had won 7 of the last 10 against the Cardinals before this series began, including the last four. Seven of those ten games went under the total. The teams had split their last six meetings in St. Louis with four of the six going under the total.

There is no question that the Yankees are the better team, but there is also no doubt that the pitching matchup on Saturday favors St. Louis. German has not looked that good for New York and the Yankees don’t figure to have him in the starting rotation in the playoffs. I am not really sure what the Yankees see in German. He was okay in 2019 with an ERA of just over four but then in 2021 he wasn’t that good with an ERA of 4.58 and this season he has not pitched well. On the other side, Montgomery was pretty good for the Yankees. He had an ERA of about 3.5 and kept them in almost every game. Many people questioned why New York would give up one of their regular starting pitchers, especially with Severino on the injured list.  Montgomery may also have a chip on his shoulder and really be motivated to beat his former team. The Yankees are capable of beating any pitcher, but it is worth noting that in limited at bats, no one on the Yankees has had any success against Montgomery. Rizzo, Benintendi, Kiner-Falefa and Trevino do not have any hits against him and Donaldson only has one hit in five at bats.

I don’t think German is capable of shutting down this St. Louis lineup and Montgomery has already shown he is capable of keeping his team in games. I’ll take the Cardinals to get the home win.