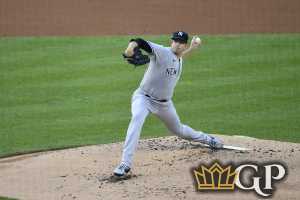 Bet at top online sportsbooks today and get the opening line for the MLB series between the Boston Red Sox and New York Yankees starting Friday, August 14 from Yankee Stadium. Check out Bitcoin betting options and Join us Today!

The Boston Red Sox and New York Yankees collide for the second time this season starting Friday night in The Bronx in the first of an extended four game series. Ron Roenicke’s squad should invade Yankee Stadium determined to put forth a better showing this time around after getting the brooms busted out on them at the beginning of August. New York outscored them by the aggregate score of 19-10, but the Yankees got to take advantage of starting pitchers Austin Brice and Ryan Weber who are no longer on Boston’s current roster. Dating back to last season, the Red Sox have dropped six straight and 11 of their last 12 to their hated rivals. With the season slipping away rather quickly, Boston must show up for this series or they can likely kiss their playoff hopes goodbye!

Eovaldi looked like the staff ace of the rotation last time out spinning six innings of 3 ER ball against the Toronto Blue Jays while striking out 10 batters and not allowing a single walk. Boston has come out on the right side of the scoreboard in three of his four made starts of which a pair were of quality. He has however had issues with right-handed bats evidenced by his .351 BAA and .926 OPSA, so it’s going to be a mighty test dealing with the righty power bats of Aaron Judge and company. Regardless, he’s stepped up in the past in going 1-1 with a 1.95 ERA and .173 BAA through five career starts against the Yankees.

Cole will be out for some retribution in the series opener after the Rays sent him to the showers in his shortest stint of the season last time out. Still, the $324M dollar man put his team in a position to win by tallying his first double-digit K tally of the season with 10. Through four starts and 22.1 total innings pitched, Cole has allowed 16 hits and 8 ER while fanning 25 and walking five. He’s 2-1 with a 3.60 ERA and 1.13 WHIP versus Boston lifetime, but has been hit to the tune of a .674 BAA with the top of the Red Sox lineup all taking him yard at least once.

Though Perez is yet to see the sixth inning in any of his first four starts, upper management isn’t going to complain about his overall body of work. The veteran left-hander enters his fifth start 2-2 with a 3.38 ERA and miniscule .197 BAA. He had the Red Sox in a position to beat the Tampa Bay Rays a second straight time last time out after tossing 5.2 innings of 2 ER ball, but the bullpen spit the bit once he departed. He’s held both lefty and righty bats in check to this point, so it will be interesting to see how he handles NY’s potent and unforgiving offense which raked him to a 9.97 ERA and .736 BAA through five career starts.

The Big Maple’s first two turns in the rotation were nightmarish to say the least. He was ripped for 12 hits (1 HR) and 6 ER while tossing a combined four innings in taking a loss and no decision against the Nationals and Red Sox respectively. Most alarming was his velocity which was way down. The lefty did however look much like his old self last time out after tossing 6.1 innings of 3 ER ball and tallying 11 K against the Rays. That said, a pair of long balls cut his night short. He’s 5-1 with a 3.23 ERA and hefty .620 BAA through nine career starts against Boston.

As thinned out the starting rotation currently is, the Red Sox have limited pitching options that are stretched out and capable of starting and going deep into games. Righty Dylan Covey is on the major-league roster and could get the starting nod. Other options to make this spot start down in Pawtucket are righties Tanner Houck, Bryan Mata, Chris Mazza and Mike Shawaryn.

Happ’s been equally brutal in both of his 2020 starts. He conceded 4 ER and 2 HR to the Baltimore Orioles in his season debut, and followed it up with another 4 ER and 1 HR in the next outing at home versus the Philadelphia Phillies. In all, he threw a combined seven innings and issued eight walks to just 3 K. He has however dominated the BoSox throughout his career in going 11-4 with a 3.00 ERA and .341 BAA over 24 starts, but is currently in terrible form and not one to be trusted as a heavy chalk.

Godley entered Wednesday night’s home start against the Tampa Bay Rays with a 3.97 ERA. Once he was yanked after just three innings, it skyrocketed to 8.16 after getting bludgeoned for 10 hits (3 HR) and 8 ER. Once a promising prospect in the Arizona Diamondbacks organization, it’s highly likely Godley gets served his walking papers soon if he can’t turn things around. A solid showing tonight looks to be highly unlikely after the righty was roughed up for six hits (2 HR) and 5 ER when he last faced the Yankees on the road back on August 1. Gio Urshela and Aaron Judge each took him deep, and he only managed to go 3.1 innings before getting the hook. Godley is yet to see the fifth inning and tonight should be no different as tough NY is against right-handed pitching.

Tonight will mark Montgomery’s second start against the Red Sox this season. He came a single out away from logging a quality start the first time around after tossing 5.2 innings of 1 ER ball while notching 4 K and issuing just one free pass. The lefty has been the beneficiary of solid offensive production with the Yankees averaging 6.0 runs per game in his three made starts. His 5.17 ERA and 5.01 FIP lets MLB bettors know his stuff’s been hittable, and that’s something that could bite him tonight even though he owns a career 3.60 ERA and .222 BAA versus the Red Sox.