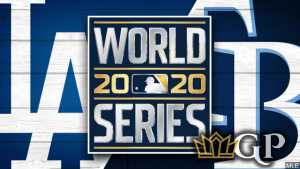 The two best teams in the regular season will meet in the 2020 World Series, as the Tampa Bay Rays take on the Los Angeles Dodgers. Let’s look at the latest World Series odds, the schedule and World Series picks.

The Rays are all about pitching, as they have three top starters in Blake Snell, Charlie Morton and Tyler Glasnow. The Rays also have two days off to reset their pitching staff. Glasnow is the likely starters for Game 1 and he has an ERA of 3.57 when getting five days of more of rest. Blake Snell should go in Game 2 and his ERA on normal rest is 3.27. Charlie Morton would go in Game 3 and his ERA with extra rest is 3.63. He could be lined up to start Game 3 and a potential Game 7 and he is the all-time leader in wins in Game 7. The Game 4 starter for the Rays would probably be Ryan Yarbrough in what could be considered a bullpen game.

The concern for the Rays is an offense that was just 12th in the league in runs scored. The Rays rely heavily on the home run to score their runs, as over 70% of their runs were scored by way of the long ball in the playoffs. Randy Arozarena has been red hot in the playoffs and he is carrying Tampa’s offense. He hit .321 in the ALCS while the rest of the team hit .183. The Rays are going to need to find more ways to score runs because the Dodgers had the second-lowest rate of home runs allowed in the regular season.

On the other side, the Dodgers feature an offense that outscored opponents by a total of 136 runs. The Dodgers average 5.82 runs per game compared to Tampa’s 4.82 runs per game. Los Angeles has hitters up and down their lineup who can drive in runs and it could be that leadoff hitter Mookie Betts is just ready to get hot.

The concern for the Dodgers is their pitching. Their two top starters, Walker Buehler and Clayton Kershaw have injury concerns, as Buehler has problems with blisters, while Kershaw has problems with his back. Kershaw also has to overcome the stigma of being the worst postseason pitcher in history.

On paper, the Dodgers are the better team. They have the better offense and the pitching edge for the Rays is not that great. The problem with backing the Dodgers is that the price is too high. Los Angeles is the better team, but they should not be a 2-1 favorite. I don’t know that I would back the Rays, because I don’t like going against the better team, but I am not laying 2-1 on Los Angeles. I think the better choice is to play these games to go under. The Rays offense is simply not very good. I was unimpressed with Tampa’s offense in their series against Houston and the Dodgers have better pitching than the Astros. I do like Tampa’s pitching and they should be able to hold down the Los Angeles offense. I will look to take these games under the total.