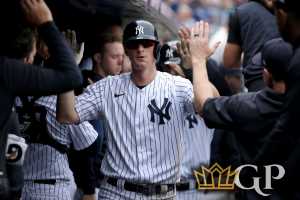 The focus for sports bettors may be on the NBA and NHL playoffs, but Major League Baseball continues to roll along with a lot of exciting games. Let’s look at weekend MLB picks for Saturday, May 14 and Sunday, May 15.

The focus for sports bettors may be on the NBA and NHL playoffs, but Major League Baseball continues to roll along with a lot of exciting games. This weekend’s MLB action features a full slate of games on Saturday, May 14 and Sunday, May 15 including a matchup on FS1 on Saturday between the Braves and Padres. The ESPN Sunday night game has the Giants visiting the Cardinals. We had been rolling going 8-4 over a couple of weekends but pitching changes wiped out most of last weekend’s plays and we went just 1-2 with three picks. Let’s look at weekend MLB picks for Saturday, May 14 and Sunday, May 15.

The first game we’ll look at for Saturday has the Yankees visiting the White Sox and it is Jordan Montgomery expected on the mound against Dallas Keuchel. One of last week’s plays was wiped out when Keuchel didn’t get the start. There used to be a time when you could trust Keuchel to pitch well and keep his team in the game but those days are long since gone. He is 2-3 this season with an ERA of nearly seven. Montgomery has been solid for the Yankees this season with an ERA of just under three.  I’ll take the Yankees to get the road win and also hedge a bit just in case Montgomery isn’t in top form and also play the game over the total.

The Mariners visit the Mets on Saturday night and the pitching matchup should be outstanding with George Kirby getting the start for Seattle, while the Mets send Max Scherzer. Kirby is the real deal for the Mariners and he was excellent in his first career MLB start last time out. He won’t be fazed at all by the bright lights of New York. The Mariners are not hitting right now and that doesn’t figure to change on Saturday against Scherzer. I’ll go under the total.

The early game on Peacock on Sunday has the Braves visiting the Padres. It should be Joe Musgrove on the mound for San Diego, while the Braves send Kyle Wright. Musgrove has been superb this season with a 4-0 record and an ERA of about two, while Wright has been solid with a 3-2 record and a ERA of just above three. This game has a really early start and that may slow the hitters down even more than the two starting pitchers. I’ll go under the total.

The Houston Astros visit the Washington Nationals on Sunday and the probable pitching matchup has Justin Verlander going against Patrick Corbin. Verlander has been outstanding so far this season with a 4-1 record and a 1.55 ERA, while Corbin has been a dumpster fire. He has simply been a disaster with an 0-5 record and an ERA above six. This looks like a mismatch, so I’ll take the Astros to get the road win.

I am looking at the Yankees and White Sox game on Sunday and it should be an excellent pitching matchup between Nestor Cortes and Michael Kopech. Cortes has simply been one of the best pitchers in the league over the past couple of seasons and he has been really good this season with a 1-1 record and a 1.41 ERA. Kopech has an ERA of less than one this season and it looks like he could be an answer for the White Sox in their rotation. I’ll go under the total.

It should be a high scoring game on Sunday between Kansas City and Colorado. The Royals are expected to send Carlos Hernandez to the mound, while the Rockies go with Austin Gomber. Hernandez continues to struggle for the Royals with an ERA of more than seven and it isn’t likely to get any better in Colorado. Gomber hasn’t been that great with a 2-3 record and an ERA of more than four. This game should see a lot of runs so I will go over the total.