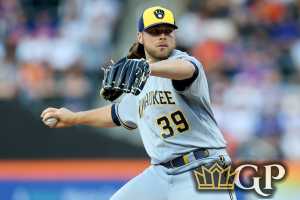 Baseball picks for this weekend are ready to roll with MLB picks for Saturday, June 25 and Sunday, June 26. We had a number of pitching changes last weekend that wiped out some plays, but we did well with the Phillies winning on Saturday and the Phillies and Nationals going over on Sunday. This weekend’s MLB action features a full slate of games on Saturday, June 25 and Sunday, June 26. The regional games on FOX on Saturday have the Dodgers at the Braves and the Rockies at the Twins. FS1 has two games, as the Nationals are at the Rangers in a matinee, while the Mariners are at the Angels in a late game. The Sunday Night ESPN game has the Dodgers at the Braves.

Let’s look at weekend MLB picks for Saturday, June 25 and Sunday, June 26, including the ESPN game between the Dodgers and Braves on Sunday night.

The Toronto Blue Jays visit the Milwaukee Brewers on Saturday with the probable pitching matchup having Yusei Kikuchi going against Corbin Burnes. The Blue Jays have not gotten much out of Kikuchi this season, but he is still in the starting rotation. He comes into this game at 2-3 with an ERA of nearly five.  On the other side, Burnes is 5-4 with a 2.31 ERA. This looks like a mismatch, so I will take the Brewers to get the home win.

Another pitching matchup takes place in San Francisco, as the Reds visit the Giants. It is so bad for the Reds that they have Mike Minor making starts. He has been awful for Cincinnati with a 1-3 record and an ERA of nearly seven. The Giants send their ace, Logan Webb and he is 6-2 with a 3.26 ERA. I will take the Giants to get the home win.

One of the late games on Saturday has the Phillies visiting the Padres. It should be Zach Eflin going against Blake Snell. Last week we had a pitching change that wiped out one of our plays as Snell didn’t go. Monitor the matchup here, as Eflin is dealing with a minor injury. If it is Eflin vs. Snell then I will go over the total.

The Pirates visit the Rays on Sunday with the probable pitching matchup having Roansy Contreras going against Shane McClanahan. This should be a low scoring game, as Contreras is 2-1 with a 2.89 ERA, while McClanahan is 7-3 with a 1.81 ERA. Neither of these teams is scoring many runs right now, so this should be a very low scoring game. I’ll go under the total with the Pirates and Rays on Sunday.

This seems to be the weekend with some major pitching mismatches and we get another one between the Orioles and White Sox. The Orioles are expected to send Jordan Lyles, while the White Sox go with Dylan Cease. Lyles is 4-6 with a 4.92 ERA, while Cease is 5-3 with a 2.68 ERA.  I’ll lay the price and take the White Sox to get the home win.

The last game of the weekend has the Dodgers visiting the Braves on ESPN. Did you ever think you would see Tony Gonsolin with a 9-0 record and a 1.58 ERA? He has been the best starting pitcher in the National League this season. It was thought that the Dodgers would be relying on Walker Buehler and Clayton Kershaw, but Buehler is out with injury, perhaps for the rest of the season and Kershaw has been in and out of the rotation. Gonsolin and Tyler Anderson have been carrying the staff. The Braves are expected to send Spencer Strider to the mound on Sunday night. He is 3-2 with a 3.40 ERA. He is coming off a poor start last time out against the Giants, as he went just 3.2 innings and gave up six runs. I think he will be better on Sunday night, but I still give the edge to the Dodgers. I will take Los Angeles and also play the game under the total.