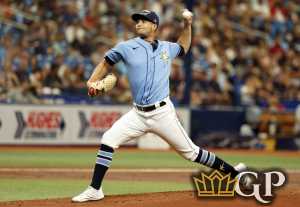 Baseball picks for this weekend are ready to roll with MLB picks for Saturday, August 6 and Sunday, August 7. Let’s look at weekend MLB picks including the Sunday Night Baseball game between the Padres and Dodgers on ESPN.

The first of our weekend picks has the Tampa Bay Rays visiting the Detroit Tigers. The probable pitching matchup has Shane McClanahan going against Garrett Hill. The Rays are very much in the Wild Card race despite having a lot of injuries and one of the reasons they are in playoff contention is McClanahan. He is 10-4 on the season with a 2.07 ERA. Hill is 1-3 with a 5.88 ERA. The Rays need to beat the teams they are supposed to beat if they expect to make the playoffs and I expect them to get this win on Saturday.

The Red Sox visit the Royals on Saturday and it should be Nathan Eovaldi going for Boston, while Kansas City sends Daniel Lynch. Eovaldi is 5-3 with a 4.11 ERA this season, but he has pitched really well on the road with a 4-0 record and a 2.25 ERA. Lynch has not pitched well this season, as he comes into this game with a 4-7 record and a 4.70 ERA. He has been even worse at home with a 1-3 record and an ERA of nearly six.  This is very similar to the previous game, as the Red Sox can’t afford to lose to inferior teams. I’ll take the Red Sox in this one.

The Reds visit the Brewers on Sunday and it should be Hunter Greene going against Corbin Burnes. It has been all or nothing for Greene this season and most of the time it is nothing. He is 4-12 with a 5.26 ERA. Every once in a while, he will throw a really good game, but more often than not he struggles. Burnes is 8-5 on the season with an ERA of 2.49. This should be a mismatch, as the Brewers are the far superior teams and Burnes is the better pitcher. I’ll lay the price and take Milwaukee in this game.

The Giants visit the A’s on Sunday and it should be Logan Webb going for San Francisco, while Oakland sends Adam Oller. This looks to be a mismatch, as Webb comes into this game with a 9-5 record and a 3.20 ERA, while Oller is 1-4 with a 7.68 ERA. The Giants are barely in Wild Card contention and they simply have to beat teams like the A’s if they are to have any chance, especially with their ace on the mound. I’ll lay the price and take the Giants in this one.

The Sunday night game on ESPN has the Padres visiting the Dodgers. It should be Yu Darvish going for San Diego, while Los Angeles sends Tyler Anderson. The Padres have a much different lineup than they had a week ago, as Juan Soto, Josh Bell and Brandon Drury are very good hitters. San Diego matches up much better with the Dodgers than they did earlier this season. Darvish 10-4 with a 3.30 ERA and he has been excellent on the road with a 6-1 record and a 2.17 ERA. Anderson has been even better, as he is 12-1 with a 2.89 ERA. There is a lot of firepower on both clubs, but these two pitchers have been excellent this season. I’ll go under the total with the Padres and Dodgers on Sunday night.