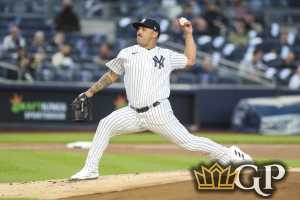 It is another full weekend of MLB action with 15 games on Saturday and 15 on Sunday. Let’s look at weekend MLB picks for Saturday, April 23 and Sunday, April 24 including both nationally televised games.

The first month of the MLB season is almost in the books and there have been a few early surprises. The Oakland Athletics have played much better than expected, while the Philadelphia Phillies have been worse than expected. It is another full weekend of MLB action with 15 games on Saturday and 15 on Sunday. The national TV game for Saturday has the Chicago White Sox at the Minnesota Twins on FS1, while the Sunday national TV game has the Milwaukee Brewers at the Philadelphia Phillies on ESPN. We started off last weekend well going 2-1, but we fell apart on Sunday. Let’s look at weekend MLB picks for Saturday, April 23 and Sunday, April 24 including both nationally televised games.

One of the early games on Saturday has Cleveland visiting the Yankees and New York will be listed as the home favorite. Nestor Cortes is expected to get the start for the Yankees and he has looked really good so far this season. Cleveland was not even sure about their starter for Saturday, so the edge in pitching is going to be with New York and they are at home. I’ll take the Yankees for the first play on Saturday.

The feature game on FS1 on Saturday has the White Sox visiting the Twins. Both teams are capable of putting up a lot of runs and the probable pitching matchup should help the cause. The White Sox are expected to go with Vince Velasquez who was a major disappointment in Philadelphia, while the Twins counter with Dylan Bundy. I know Bundy has pitched better than anticipated, but I still don’t think he is any good. I’ll take the White Sox and Twins over the total.

The late game on Saturday has Kansas City visiting Seattle and the probable pitching matchup has Kris Bubic going against Matt Brash. It has been ugly so far for Bubic this season, as he has thrown five innings and given up five hits and six earned runs. Brash looks to be the real deal for Seattle and he is a pitcher worth following all season. I’ll lay the price and take the Mariners in this game.

The first game we’ll look at for Sunday has the Giants visiting the Nationals and the probable pitching matchup has Logan Webb going against Josiah Gray. There is no question that Webb is one of the top pitchers in the league and the Giants are off to another strong start this season. It is hard to know what to make of the Nationals, but we do know they are not expected to contend this season. The Giants have the edge on the mound and I expect them to win this one.

There is one team that looks to be in serious trouble this season and that is the Cincinnati Reds. The Reds have struggled mightily all season in all phases of the game. It doesn’t figure to get any better on Sunday, as they face Adam Wainwright and the St. Louis Cardinals. The Cardinals look like a contender in the NL Central this season and there is no reason to expect them to have any trouble in this game against the Reds. I’ll take St. Louis in this contest.

The ESPN Sunday night game this week has the Brewers visiting the Phillies. Milwaukee has turned things around since a bad opening series and looked better, while the Phillies continue to struggle. The probable pitching matchup for Sunday night has Eric Lauer going against Aaron Nola. The Brewers have gotten decent pitching so far from Lauer, but he faces a tough test on Sunday against a Phillies team that is much better against left-handed pitching. On the other side, Aaron Nola has struggled early on with a 5.52 ERA. The good news for Nola is that he has a 3.05 ERA in his career against Milwaukee. The edge on Sunday night goes to the home team, so I will back the Phillies to get the win.