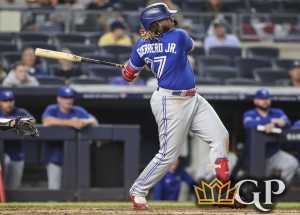 My Weekend MLB Bets ended up churning out a profit last week after going 4-3 to move us to 90-52 for the season. Here’s what I’ve got going for this week’s installment of Weekend MLB Best Bets.

Not gonna lie; I’ve lost interest betting baseball with the season now in the home stretch and online sportsbooks forcing us to lay ridiculous amounts of juice on the good teams every passing day. I’ve also grown tired of the pitching changes and cancellations. Mostly, football season has arrived and 99 percent of my attention has gone the way of breaking down the copious amounts of college football and NFL betting lines. Regardless, my Weekend MLB Bets still ended up churning out a profit last week after going 4-3 to move us to 90-52 for the season. No idea how far in the black we are, but you’ve definitely added to the bankroll if you’ve been along for the ride since day one. Here’s what I’ve got going for this week’s installment of Weekend MLB Best Bets. Again, follow me on Twitter @MikeRose77 in case any late breaking news cancels a position.

The BJ’s are on a heater right now having tallied wins in seven straight and 10 of their last 11. They’re now on the precipice of overtaking either the Yankees or Red Sox for one of the two AL Wild Card slots. The O’s had been raking against left-handed pitching earlier in the year, but have fallen off a cliff recently with the No. 21 ranked OPS over the last 30 days. Ryu’s 3-1 with a 3.33 ERA and .207 BAA through four 2021 starts against Baltimore, and he’ll be installed a heavy chalk to win this game. Lay the -1 run-line if desired, but I’ll be attacking Toronto’s team total instead with Vlad Jr. and the boys set to run up against the gas can otherwise knowns as Keegan Akin. The lefty shockingly handed the BJ’s their only loss back on August 31 when he tossed five innings of 1 ER ball. If you can believe it, he’s led the Orioles to wins in each of his last three starts. That comes to an end today in a one-sided BJs romp!

A big one’s set to go down in Busch Saturday night when Luis Castillo leads the Reds into battle against Miles Mikolas and the Redbirds. Sorry, but I’ve lost all patience with this Cincinnati club. There’s no urgency. There’s no passion. This team looks as if it just goes through the motions and hopes for the best. It enters this pivotal weekend set having dropped five straight series to really do itself a disservice in the Wild Card race. The Cardinals sit 3.5-games out and have recently been playing a more competitive brand of ball regardless of dropping their two most recent series against the Dodgers and Brew Crew. When this series is said and done, look for St. Louis to draw even nearer to Cincy in the Wild Card race. Hit Mikolas as a slight home pup!

Hat tip to the Royals for not letting the season get completely away from them. They’ve come up big for us in a number of spots since the hot streak began in the middle of August. But with just three wins tallied over its last 10 games, it looks like the team is running on empty. Enter Minnesota right-hander Bailey Ober who has become one of the lone bright spots of the Twinkies miserable 2021 campaign. He’s 2-2 with a 4.00 ERA but the latter is bloated simply due to getting off to a rough start. Though primarily a six inning pitcher at best, he’s thrown to a 2.05 ERA and 2.84 FIP over the last month and led Minnesota to wins in seven of his last eight starts. I’m not a fan of Kris Bubic. With that, hit the Twins on the first five innings moneyline to take their horrid bullpen out of the equation.

Oh boy do we got a good one to close the crucial series out between the Padres and Dodgers! It took a bulk of the season, but Blake Snell is firing on all cylinders right now having allowed just five hits (1 HR) and 5 ER while racking up 42 K to just 6 BB over the course of his last four starts (28.2 IP). Mad Max has done nothing but excel since becoming a Dodger in leading LA to wins in all eight of his made starts. He’s been flat out nasty over the last 30 days as evidenced by his 0.75 ERA, 0.95 FIP and 14.1 K/9 rate! As locked in both starting pitchers currently are, I can’t wait to sit back with a number of cold beverages and take in a good ‘ol fashioned pitcher’s duel. And yes, this game will be on one of my tertiary TVs with the red zone channel on the main screen. Hit the F5/FG Under and watch these cats do work – Slam Your Man!